The Ins and Outs of Buying Trade Cards

I don’t know that I have a favorite type of card to collect, really. Many people gravitate towards tobacco cards. But I love caramels and early candy cards just the same. Later gum cards and strip cards are probably a little down the pecking order for me but the reality is that I probably collect just as much of most types as I do others. And you better believe that trade cards are in that mix.

But in talking with collectors and collecting these cards myself for several years now, there are a lot of misconceptions about them. So here’s hoping this makes collecting them a bit easier. 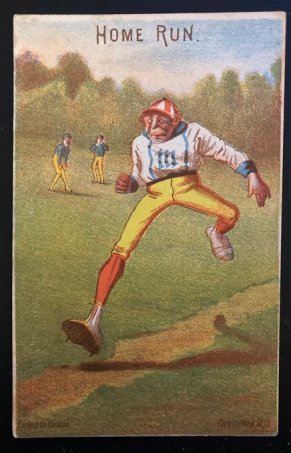 By far, the biggest question I get about trade cards is if the cards are really as old as advertised. Many find that hard to believe because so many exist and because you can often find them in great condition.

But yes, the cards are really quite old. The majority of them date back to the 1880s and 1890s. Back then, the cards were printed like crazy, which explains why you see so many today. The reason so many still exist is because billions were printed. As I outlined in an article here, one particular set, for example, included more than five million cards being printed. That was one specific type. There are so many different cards that, frankly, no one has even been able to catalog them all. Even the sports issues, which I think have a decent handle on, have new ones pop up with some degree of regularity that I’ve never seen.

So what about the condition? Sure, some are in bad shape but there are a good many out there in mid-grade or even high-grade condition. What about that?

Many of these cards were kept in scrapbooks and that has helped preserve them. And while the majority of those cards have been soaked out, removing them from the pages, even today, you can find complete books of collections of them still fully intact.

A final note on the dating is that, assigning a blanket “1880s” date on all of these is hardly a fair way to classify them. Yes, the majority are believed to have been issued in that period. But other popular types, like Arbuckle’s Coffee cards, were issued in the 1890s. Liebig meat extract cards, another abundantly common type, extended well into the 20th century. And it is not terribly uncommon to find other trade cards with dates beyond 1900. The takeaway here is not to assume that every single trade card out there is automatically from the 1880s.

Without a doubt, one of the things to watch for when it comes to buying trade cards is trimming.

Now, look, if you’re like me and buy a lot of low-end stuff, you may not care much about that. But if you’re buying a card under the assumption that it’s in near-perfect condition, you’ll want to pay real close attention to the card.

Some trade cards exhibit some sort of trimming. That might just be the removal of the thin white border that accompanies a lot of these cards. Or it may be an outright hack job, cleverly disguised as a ‘die-cut.’

Die-card cards did certainly exist in the 19th century. In fact, there were a lot of them. But sometimes, collectors just cut around the edges of a picture and removing the background of the card entirely, like this one here. If you just see this card, it is cut so neatly that it might give the impression of being a die-cut card designed that way. In reality, a former owner of this card likely cut out the background from it to remove an advertisement at the top or just because he or she thought it looked better like this.

A telltale sign of trimming is often found in uneven, hand cut edges, But even on expertly cut cards, they could still be trimmed. One way to tell sometimes is on the back if there is an advertisement present. If text is badly cut off, chances are, you’ve got a trimmed card. If you’re not sure if you’ve got a trimmed card, try to find other examples of the same card to check them against. And that is especially true in less obvious examples of trimming where only a small amount may have been taken from the edges.

Soaking cards was something that was very common. Many of the cards we have individually resided in albums or books and were since removed by soaking (placing them in hot water) to remove them from the pages. That was a process particularly common with trade cards and we know that because these a lot of these cards show the proof of that.

Some cards can be soaked out with little trouble and leaving hardly any traces. But certain types of glue can leave marks of them that are still evident today. Shown here is a card where dark traces of glue were left behind. Sometimes, sellers will incorrectly call this toning. But that sort of aging is different from this, where you can actually feel the parts of where the glue was.

Cards like this don’t bother me one bit. Many of the trade cards I have have traces of glue like this. But again, I mention it because, if you are particularly only interested in higher-graded cards, you’ll want to watch for trade cards that have this or, worse, paper loss on the back. 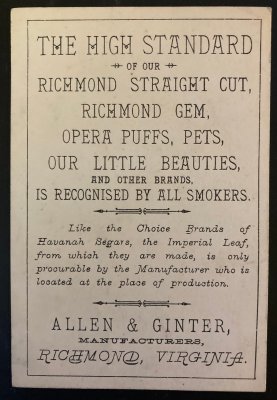 Looking for bargains in trade cards? One great thing to pay attention to are the advertisements.

It’s true that, for the most part, the particular picture on the card matters most when it comes to buying trade cards. But some advertisements on otherwise common looking trade cards are really important, too.

Similarly, advertisements for other tobacco companies, popular brands still around today, or for particular events are noteworthy. Others even included sports ties, such as schedules for teams. And some offering mentions of trading cards are highly desired, too. This Old Judge card picturing a boy trying to buy cigarettes starts around $75-$100 these days because it mentions the popular Old Judge cabinet cards of baseball players on the back. 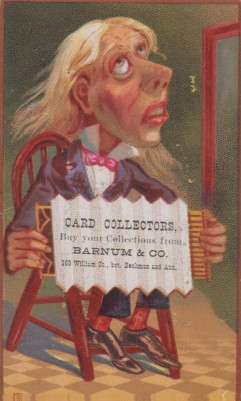 Once you start looking around at trade cards, you’ll notice that, in fact, many have no advertising printed on them at all. So what’s that about?

Often, those sorts of cards are touted as ‘stock’ cards — meaning, cards that had the picture printed on them but had not yet gotten an advertiser’s marking. I have no doubt to believe that did not happen to some. However, these sorts of cards are sometimes even called proofs or errors or any other number of intriguing names.

Some of those names might be applicable to a few issues. For example, the 1878 Forbes baseball cards have many known examples that are not only lacking advertisers but also lacking the captions that accompanied pictures. However, fully printed cards without advertisers on them are not really proofs or errors — and many were probably not even stock cards. There are two things that point to this.

First, while trade cards were generally given away by businesses, some printers actually just printed them and sold them to collectors that wanted them. We know that because some (like the card pictured here) actually advertised that very fact.

Second, it’s important to remember that every paper collectible is not a true trade card. Paper ephemera and collectibles came in all shapes and sizes. Some were merely die-cuts of pictures. Some things that look like trade cards were cut from larger pictures or books. A misconception is that any 3″ x 5″ paper-sized ‘thing’ is a trade card and that’s not the case. Many of these collectibles have blank backs and not everything should be lumped into the trade card category. That’s not to suggest those collectibles don’t have value — only that they aren’t actual trade cards.

Protecting yourself from those kinds of purchases can be tough. And, frankly, in some instances, there’s no way to tell whether something was a true trade card or not. But one great thing you can do is look for other examples of that same card and see if you can find any with advertising. That isn’t fool proof since some trade card images were used on all sorts of other paper collectibles. But it’s a start and can help make the case of determining if you’ve got a true trade card or not. 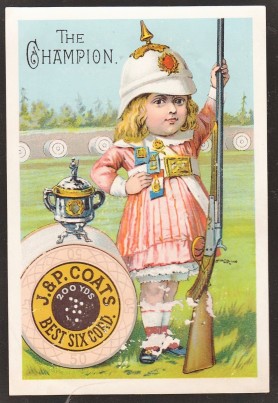 One thing I really wanted to touch on were the various misconceptions out there when it comes to the prices of trade cards. And, oh boy, we could spend all day on this one. There are two really big falsehoods out there that we should touch on.

First, many collectors upon hearing that these cards are so old assume they’re way out of their price range. But the reality is that many trade cards are inexpensive. Sure, trade cards featuring sports are more expensive. And some very early ones can sell for thousands or even tens of thousands of dollars. But a lot of non-sports trade cards can be bought for just a few dollars. And again, that’s because there are so many out there.

That said, another misconception out there is that, simply, everything not related to sports is or should be dirt cheap. And, well, that’s just incorrect as the first line of thought.

Trade cards are a bit like Old Judge cards in a way. Finding just any old one may not be difficult but finding specific ones can be as difficult as finding a needle in a haystack. There are some really great trade cards that I’ve seen and kicked myself for not buying because I simply haven’t seen them again. A particular one was a card depicting Uncle Sam. A seller wanted $40 for it and I was hoping to get it for about half that amount. It was early on when I just started getting into the American-themed stuff that I’ve come to appreciate and I figured I’d see it again. Wrong. Knowing what I know now and seeing how the prices of card has risen, I’d gladly pay above his asking price for it today. Lesson learned.

The reality is that, not every non-sports trade card is going to be under $5 or even $10. Cards picturing famous, subjects, obviously are more valuable. But even cards of generic subjects can command $20 or $30 or more, if the card is in great shape, has an intriguing ad, or just looks cool.