While most trade cards advertised a product or business, that wasn’t always the case 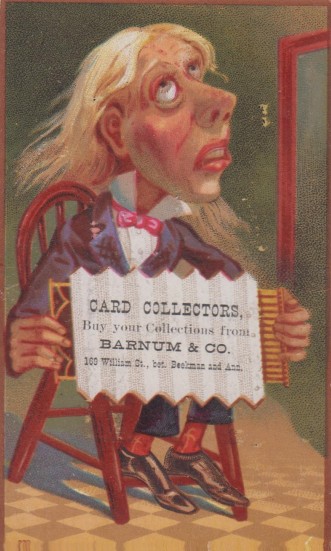 The earliest sports cards from the 19th century were typically either tobacco cards packaged with cigarettes or trade cards.

After the success of cigarette cards, companies began packaging cards with other products — food, candy, gum, you name it. But while there were some 19th century candy cards, the origins of most trading cards were mostly cigarette cards or trade cards.

Trade cards are often called advertising cards, and there’s good reason for that. That’s because the majority of these cards were usually issued with a business name printed or stamped on the front or back. Businesses are believed to distribute these as a sort of early business card to advertise their establishment.

But the fact is, even if not intentional, the cards became collectibles. Some people had albums of these sorts of cards, wanting them more for the picture than for the contact information that was added to them.

While most trade cards have business names or advertisements on them, some only have a picture with a blank back. Often, these are called stock cards as collectors have come to believe they were expected to have an advertisement but ultimately never received one. And instead of being discarded, those cards found their way into the hands of collectors.

And while that idea of the cards always intending to have advertisements may seem correct, that isn’t really true. 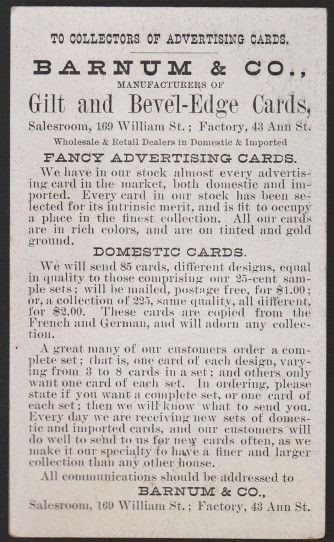 See, many trade cards weren’t intended to be advertisements at all. Some, like this one, did have advertisements on them — but this ad actually indicated that they were printed precisely for collectors.

Now, you might be thinking that these advertisements were for businesses to purchase them for distribution, etc. But that wasn’t the case. As is the case on this advertisement, the cards were made and sold directly to collectors. While not their primary business, companies, such as this one, Barnum & Co., were, in fact, de facto card companies.

This sort of offer explains how a collector could amass such a large collection. They didn’t necessarily have to get, say 1,000 different cards from businesses. They could pay a mere $10 and end up with 1,100 of them with this offer. More collectors than you think, I’m convinced, didn’t have hundreds of trade cards — they had thousands of them. I base that not only on this idea, but the fact that so many trade cards are still in circulation today, more than a century later.

Another part of this specific advertisement intrigues me, too. This card mentions that the cards are copied from French and German. Many trade cards from those countries (particularly, from France) are often found here in the U.S. I’d often wondered why so many French trade cards, in particular, were fairly easily to locate here. That explains it.

The direct sale of trade cards is also intriguing to me for the simple reason that, strip cards or Exhibits are often touted as the first type of trading cards issued without a product or advertisement in mind. But cards such as these prove that earlier cards were indeed sold to collectors without a product.