The American Caramel Company is best known for creating a slew of baseball card sets starting in 1908 and running into the 1920s. But the company produced all sorts of sets, really, and one of the more intriguing ones was for a series of horse racing jockeys.

The set was a spinoff of Allen & Ginter’s Racing Colors set that was issued in 1888. Both sets are closely related but also quite different. 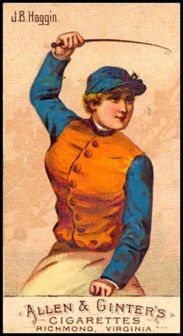 Allen and Ginter’s offering was released in 1888 and included a total of 50 cards. The cards depict female horse racing jockeys representing stables. I’ll get into that more in a bit.

The cards have Allen and Ginter’s traditional look with color lithographic imagery that is probably a bit underrated. Some of the cards lack sufficient detail but in general, it’s a great looking series.

Cards have striking color with an assortment of background colors. The Allen and Ginter name is on the bottom with a full checklist of all 50 cards appearing on the backs, a similar motif used in their other sets. These cards were packaged in Allen and Ginter’s cigarette products with one card given per each box of ten cigarettes. Like other cigarette cards of the era, you will also sometimes find these stripped of the Allen & Ginter name at the bottom, leaving them poorly trimmed.

Of note is that there are two different variations of these cards. One has a thin white border around the entirety of the card and a second is borderless.

While this set was distributed in America, it included jockeys/stables from all over the world. American entities were given priority and 20 of the 50 cards in the set were domestic figures/stables. 15 were from England, eight from France, and one from seven other countries, including Germany, Russia, Hungary, The Netherlands, Austria, Italy, and Canada.

In lower-grade condition, these typically start around $12-$15 each. 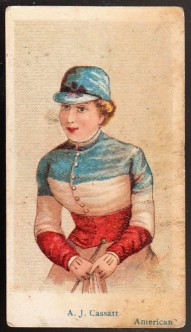 American Caramel’s set was released nearly 25 years later in 1912 and included a total of only 20 cards. The cards’ images mirrored ones found in the 1888 Allen and Ginter set.

These cards were thinner than the 19th century issue and had a much more muted design on the front. American Caramel’s name, for example, is not found on the front. Only the name of the individual/stable and their nationality is printed in a larger border area at the bottom. The design, with a name in blue ink, is essentially a mirror image of American Caramel’s 1910 E76 Prize Fighters set.

As opposed to being packaged with tobacco products, these kid-friendly cards were issued with American Caramel’s Jockey Caramels product. As indicated on the back, one card was wrapped inside with each piece of caramel.

As these are not quite as old, unsurprisingly, they are a little cheaper. In lower-grade condition, these typically start around $5-$10 each. 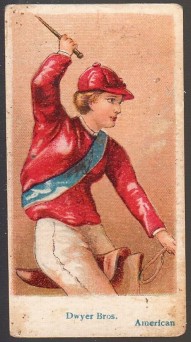 The thing that jumps out immediately in both sets is that the cards picture women but mostly had the names of men at the bottom.

Could these possibly picture men? After all, many 19th century imagery depicted men (particular boys or younger men) with a more ambiguous look that sometimes made them look, well, not so manly. But that isn’t the case here. These are clearly women as can be seen by their faces, hairstyles, and most importantly, body shapes. So what gives?

One card in the set sort of gives it away. A card for Dwyer Bros. is the name on the front. It is one of the few across both sets that does not name only an individual person. Dwyer Bros. was actually a horse racing stable/operation in the 19th century. While I am not sure this has ever been made clear, I believe the way to reconcile the use of female imagery here is that they were merely intended to be part of stables owned by the individuals (mostly men) named on the front.

Why women, though? Well, that’s a bit easier to answer. Women were often the subject of depictions in early tobacco cards. That’s likely because companies used them to lure male purchasers of tobacco into buying their product. Women were often dressed up as athletes on these sorts of cards and pictures, so their use here is not surprising even in the slightest.

Both sets are quite affordable and not too difficult to find. That, along with the stunning imagery, has made them among the most popular pre-war sets of horse racing cards.

This checklist is provided in order that cards appear on the back of the cards.