The W542 strip card set is a somewhat obscure issue from what is believed to be the 1920s (admittedly, I have seen some references citing it is from 1919). The set is so obscure that, it has only recently been a type graded by PSA (thanks in part from this site).

In short, it’s a generic set of ten sports cards, including baseball. And while they are somewhat rare, you can even sometimes find complete sets in uncut form.

The baseball cards are the most popular ones in the set and there are two of them — a pitcher and catcher. Either one would have been an easy pick for Obscure Card of the Month, but I’m going with the lesser known hockey card. 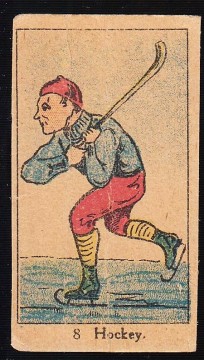 Now, complete sets of these were printed and distributed so the hockey cards were not shortprinted. But they seem to be bought and sold far less than the baseball cards.

One reason I wanted to focus on the hockey card is because, to date, it is the only hockey strip card from the pre-war era that I know of. My guess is that some others exist. Frankly, I would be surprised if they did not. But while there are a decent amount of pre-war hockey cards, strip card issues featuring the sport seem to be sparse. I’ve honestly seen more uncut strips of full sets more than I have individual hockey cards.

The hockey card, like the others in the set, is believed to feature a generic athlete. It’s not a great image, per se. But then again, none in the set really are. The set includes sloppily drawn pictures of athletes and, like other strip issues, varying ink levels create a bunch of different looks. Still, it’s an early hockey image and the vintage skates, hockey sweater, and stick still make for a very cool card.

The card is No. 8 in the set and is blank-backed. Other than the card number and title (Hockey) no other printed words exist.

So why are there so few hockey strip cards? Part of the reason for that is because many pre-war hockey cards were actually created in Canada and strip cards were seemingly a largely American phenomenon. But whatever the precise reason, hockey and pre-war strip cards don’t go together. And that’s one reason I’m such a fan of this card — it is just a very rare type for the sport.

The good news is, if you can find it, it isn’t a card that will break the bank. It often is in the $10-$15 range and while I’ve seen sellers asking more, it is not crazy expensive.