The W542 Strip Cards set is a 10-card issue that many collectors don’t give a lot of thought. It is believed to have been printed in the 1920s and is cataloged by Jefferson Burdick in the American Card Catalog as the Sports Drawings set. But while it is listed there, a reader brought to my attention sometime last year that PSA actually had refused to grade them, needing more evidence for their classification.

So it’s kind of cool that I was able to aid him in getting the first one graded.

I probably have more love for the W542s than a lot of collectors. The multi-sport set features a number of generic athletes and, like other strip issues, the pictures aren’t real great. There are two baseball cards (a pitcher and catcher) in the set as well as a hockey issue. The other sports are more minor in nature and those three are really the ones most desired.

The hockey card in particular has always been interesting to me. Despite my best efforts, I have yet to find another pre-war hockey strip card. The few hockey strip issues I’ve seen have come after 1940. Additionally, you don’t see the hockey issue very much. I’m convinced they’re being hoarded by a collector or they’ve been dispersed among the pre-war hockey collectors. You can find the uncut strips of the entire set somewhat regularly but you don’t see the individual hockey cards too often. In addition to the uncut strip set, I have two of them and got both from the same dealer that carries a lot of pre-war.

Back to the subject at hand, though.

A collector sent in a card and PSA could not grade it because they were not sure what it was. After he reached out to me, I mentioned that the set was not only cataloged but that it could easily be identified, explaining exactly why PSA should be able to connect the dots. 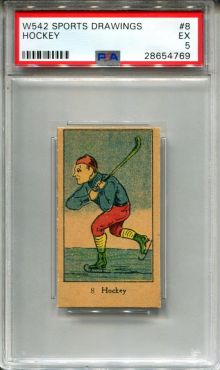 The reason for that is because the cards are thankfully numbered. That alone may not have meant they would be cataloged but Burdick provided more evidence in his book. While he did list all ten cards, he mentioned that ten were seen in the set and he listed the first five cards, in numerical order (1. Training, 2. Cricket, 3. Tennis, 4. Boxing, 5. Athlete). Those five cards and numbers correspond exactly with the cards in this set making it an easy connection.

If you have a copy of the American Card Catalog, you know that what Burdick did was rare there. Most of the sets he covered, obviously, were larger than ten cards. It simply wasn’t practical to list all of them with card numbers. But even or smaller sets, Burdick typically did not provide a checklist like he did there. Safe to say that, if he did not include that list, these cards may still not be graded by PSA.

Subsequently, PSA accepted that explanation and has now decided to grade these cards. They may take a lot of heat for labeling snafus and the like but they deserve credit for looking at the evidence and making a judgment call here.

Presented here is the card of said collector (and a fine example of that). This is the first W542 card graded by PSA and I was glad to have been able to provide some small help in them deciding to formally grade them.