Raphael Tuck and Sons was a printing company that originated in the 1800s. The company did have a U.S. presence but many collectors do not know that they were actually based in and started in the UK.

I won’t recount the full history of Tuck here but this is a good, detailed reference of the company’s history. The company began in 1866 in London and spread to other parts of the world, including the U.S., Canada, Germany, and France. Unsurprisingly, they were typically located in large cities, including New York, Montreal, Berlin, and Paris. The New York office is said to have opened by at least 1885.

It should be mentioned that these die-cuts are all typically listed as 1888 issues. However, whether or not that is the real case is up in the air. The baseball die-cuts were likely issued by the company’s New York office while the other sports, such as cricket, soccer, and rugby, likely came from the UK. It is not known if all of these cards were printed in the same year and that they were likely printed in different parts of the world makes the question of dating them a bit murkier.

Another note here — the die-cuts I am featuring are all similar in appearance with a green playing field and a title at the bottom. Tuck created other sports die-cut issues. However, the ones covered here are all from this particular type. Other types were created in different sizes, with a green patch but without a title, and with other variances.

Finally, it should be known that Tuck hardly specialized in sports issues. While collectors today typically focus on those, the reality is that Tuck created hundreds (if not thousands) of die-cuts with the majority of those being non-sports issues. The sports cards are a very small part of what the company did.

The company was known for all sorts of paper collectibles, including greeting cards and, most famously later, postcards.

But to baseball card collectors, arguably they are most known for a set of die-cut cards from the 19th century.

The cards vary a bit in height but are roughly about 3″ tall. They are printed in full color and have a bit of a three-dimensional feel as they have features that are slightly raised. I’ve seen these cards sometimes offered as early candy cards or as tobacco issues / N-Cards. But because of the nature of Tuck’s business as a printer, they are neither of those. These, really, are more along the lines of miscellaneous cards. Technically, their best classification is probably as Y-Cards, which Jefferson Burdick said included things like scrap pictures/die-cuts in his American Card Catalog.

While I don’t specialize in die-cuts, I believe they were printed mostly for the purpose of scrapbooking. They are not traditional cards, of course, and you will many times find them glued to scrapbook pages just like trade cards.

If looking for these cards, you are better off searching for R&S Die-Cuts or R&S Artistic Die-Cuts than you are using the Raphael Tuck and Sons name. Tuck did in fact create these but the more common name used to identify them is the R&S designation.

Those die-cuts are most commonly cited as being from 1888. They include generic pictures of players but they do represent specific cities. There are a total of ten cards in the checklist:

The baseball die-cuts typically start around $20-$30 in lesser condition.

The baseball die-cuts are easily the most well-known. But what many collectors do not know is that the company created die-cuts for other sports, too, including tennis, soccer, rugby, and cricket.

The cards for the other sports follow a similar pattern and it is easy to identify them as Tuck issues. Each card is a die-cut with slightly raised features with color subjects standing atop a green/grassy playing surface.

I’ve seen the die-cuts for these sports far less than I have the baseball ones. I don’t know that they are exactly scarce. Those cards, obviously, are traded less than the baseball ones and it makes sense that they would be seen less frequently. But I strongly believe they were likely produced in fewer quantities than the baseball issues simply because I have searched high and low for them and rarely come into contact with them. The baseball die-cuts are not exactly common but are not terribly hard to find with a bit of work, either.

One of Tuck’s creations was a tennis set. I have seven of these cards but believe that at least eight must exist. All of Tuck’s other sports die-cut sets have an even number of cards.

A note to condition of the tennis cards is that they can be seen with torn or even missing rackets. That holds true for any of the Tuck Die-Cuts, of course. However, it is particularly true of the tennis cards since the racket handles are very thin and more noticeably fragile than cards in the other series’.

The tennis checklist, as I know it so far, is as follows:

An eight-card soccer and rugby set was also produced by Tuck.

This set includes four cards from each sport. While it might seem a bit odd, we know that the eight cards are indeed part of a single set because they were printed all attached together as shown here. Combining rugby and soccer cards was hardly a new idea, too. There are many such sets that simply call them ‘football’ cards that include both sports.

This set has caused confusion among American collectors as a tab is printed to the attached sheets denoting it as a ‘football’ set. While it is clear that the soccer cards do not depict American football since they show a round ball, the rugby cards, of course, could be easily confused for American football — such as this one shown here.

However, they are almost certainly not a depiction of that sport for a few reasons. First, they are attached to the soccer cards and both sports, of course, were referred to as ‘football’ internationally. Second, and more importantly, one of the cards is titled, “Going for a Try,” and a try is a rugby term.

Here is the checklist for this set.

There’s also a set of ‘athletes.’

Athletes in the pre-war era that don’t refer to a specific sport are mostly athletes from track and field events. That is somewhat the case here, too, as these include track and field events and distance running. However, other sports such as field hockey, lacrosse, and cricket may be included, too. Those cards have the same font as the others so I have put them all in the same set. However, it is not clear if they are part of other sets and I have not seen a fully attached set to confirm they were all produced together.

These cards, like the tennis and football cards, are pretty tough to find. I had not previously even been aware of them until a collector informed me of them.

Here’s the checklist of these cards — again, with the understanding that perhaps they are potentially part of different sets:

Finally, a cricket set exists, too. This one consists of only six cards and depicts batsmen from two teams — one with blue apparel and the other, red.

This is probably the set that I’ve got the least personal amount of interest in. But with the popularity of cricket internationally, I am sure it is quite a desirable set for many. Like the soccer/rugby set, I suspect this would have been a set that was printed internationally instead of in America where cricket had a small presence.

As mentioned above, Tuck created other die-cuts than the ones listed here and those included cricket. There are a few other Tuck cricket sets in a similar format with a green playing surface at the bottom, but without titles.

The prices for these non-baseball cards are sort of all over the map. I’ve seen ones in good condition sell for as little as $5-$10 each or as much as $25-$30 each. 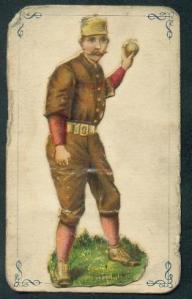 A rare set of trading cards, identified today as N352, ties into these die-cuts as well.

Little is known about these cards but we know they were packaged inside of Paxi Cigarette packages. They were called Fine Color Relief Cards and Paxi was part of the Consolidated Cigarette Company, based in New York, where Tuck was located.

The cards have an advertisement for Paxi/Consolidated Cigarette Company on the back and the fronts are these Tuck die-cuts glued or otherwise attached to blank backgrounds.

The Tuck Die-Cuts are already rare but these cards are nearly impossible to find. They are so rare, in fact, that a full checklist is not even known for them. However, the backs give us some clues to the checklist and even tell us that other Tuck sports die-cuts likely exist.

Backs of the cards state there are 100 in the set featuring the following subjects:

N352 cards known to exist were created with die-cuts from the baseball and tennis sets. From a sports vantage point, assuming the other cards were created with similar looking Tuck die-cuts, that means there should be die-cut sets of fencing and horse racing/jockeys. I have not yet documented those sets but it is difficult to believe they do not exist based on the N352 advertisement.