In the days of pre-war cards, businesses soon found out that the cost of creating a baseball card set was not inexpensive. There was the cost for the artwork or photography rights. The cost to pay players to use their likenesses. And then, of course, there was the cost to actually print the cards.

Sometimes players would agree to have their images used without compensation. This happened, for example, with the Walter Mails Game, which I outlined here. But other costs still existed if a company wanted to create an entirely new set of cards.

On occasion, these businesses could simply latch on to sets that were already created. And, really, there were two ways of doing this that stick out.

Folks like Felix Mendelsohn would create a set (as he did with the M101-4 and M101-5 sets) and then peddle those cards to businesses. Businesses could partner with him to use his cards and then have their advertisements added to blank backs. That, of course, sort of hinted that the cards were specially made just for them.

And other times, businesses could simply take sets that were printed and more hastily stamp their name or advertisement on the back. That had the same effect but was just a bit more crude.

These stamped or printed ads (in particular, the stamped ones) are often referred to as overprints — a stamping or printing that is on top of the card and added after its original printing.

There are many types of overprinted cards. The first ones, to some degree, are trade cards, I suppose. To be fair, most people do not consider trade cards to be overprints. Still, let’s take a quick look at them, anyway.

Starting in the 1800s, trade cards were basically was for businesses to advertise. They are sometimes described as an early form of business card. They typically had some sort of color lithographic image on them and while most are non-sports cards, there are many trade cards depicting baseball and other sports.

While some of those were printed only for use by a particular business, the majority of them had blank backs or blank areas on the front where a business could print or stamp their name/advertisement.

Those types of overprints, if you even want to call them that, typically don’t add much premium because, essentially, almost all trade cards had them. Blank ones (sometimes called stock cards), in fact, are often more desirable since they weren’t used.

For example, here are two 1881 trade cards showing the example of them being used by more than one business. As you can see, it’s the same card just with a different sponsor name in the box. 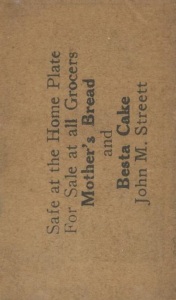 Overprints were also heavily used later in the 1910s and 1920s on strip cards.

Strip cards were cards that were inexpensively made and often printed in long strips where vendors could quickly cut or tear the cards off. These were ideal for overprints as most strip cards had blank backs where a business name or advertisement could be added.

You’ll see all kinds of overprints in strip cards. While there are many different examples of overprinted strip issues, one of the more common sets with overprints is the W514 set (a Sam Crawford is shown here). At least four different W514 overprints are known and, given the rarity of some, it is possible that others exist. 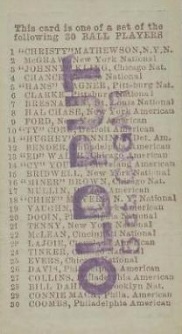 Finally, there are some candy and tobacco card overprints.

There were fewer of these but an interesting example are the Old Put Tobacco cards. This 30-card set featured baseball players with an assortment of colored backgrounds.

These cards are overprinted 1910 E98 cards, containing an Old Put Tobacco stamp on the back. The interesting thing is that, while these cards are cited as anonymous (meaning, the distributor of them is not known), E98 cards are classified in the American Card Catalog as caramel/candy cards.

So the Old Put stamp, as I wrote here, actually turns a caramel card into a tobacco card.

While overprints are really unique, there are two things that cause some concern. First, aside from trade cards, most overprinted cards are rare and much more difficult to find than other cards from the same set without the overprints. And because they are mostly rare cards, that has made some of them very expensive.

Second, in turn, fhat could open the door for lots of unscrupulous activity. While some overprints have actual print/type on them that is harder to replicate, some have basic stamps on them that could have been added by forgers in more recent years long after they were issued.

For example, look how basic the Old Put stamp is? Why couldn’t something else similar to that be replicated? 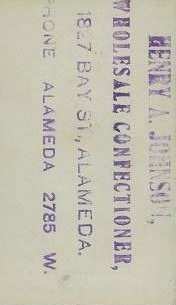 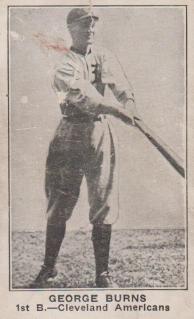 Further, we have examples of this type of activity actually taking place. A popular case is this seen with the W575-1 Henry Johnson cards.

One business that did that was a confectionery business run by a man named Henry Johnson. Johnson used these cards to advertise his wholesale business on the backs. Unfortunately the cards were counterfeited as early as the 1970s with an alternate font style used.

Another interesting ‘fake overprint’ is one with a Toy Town Stamp. These aren’t forgeries as much as they were likely just bored children that stamped a bunch of cards with a Toy Town Post Office stamp from a game. Many collectors believed the Toy Town stamped cards were legitimately used by a business to distribute baseball cards. But in reality, the stamps simply came from a game.

But my concerns aren’t limited to fake overprints of legitimate stamps or dumb stamps from a children’s game. Thing is, there’s no real definitive knowledge of what overprints really existed from the pre-war era and which ones didn’t. Sure, we can point to some and know that they are probably legitimate. But very limited ones with only a few in existence?

The problem, of course, is that anyone with a stamp or a printer can add a business name to the back of a card and claim it’s period dating back to the pre-war era. And while it can be debated how much a card with a legitimate overprint should be worth, a card bearing an overprint that was added today obviously should not carry any sort of a premium at all.

And, of course, there’s added incentive for forgers to create fake overprints. Some cards with overprints can sell for quite a bit of money — hundreds, even thousands of dollars.

So, what’s keeping this sort of stuff from happening with more frequency? Or, perhaps more relevant, what can we do to help prevent the spread of any such cards?

Well, to start, there is third party authentication to help. Any overprinted card would not carry the same amount of weight/credibility if ungraded and, you’d like to think that graders would take any kind of new overprint seriously before giving it a, pun intended, stamp of approval. And certainly some technology could likely be used to determine if a stamp is new or period. And even in the case of someone using a period stamp, I suppose it’d be possible to determine if a card was recently stamped.

And, of course, any such stamp will be scrutinized by any experienced collector. A quick Google search will reveal if other known ones are likely to have been spotted and that should help to stop forgers from easily passing these cards along. A little bit of fact checking can go a long way. Are there other known examples? Were they all discovered fairly recently? Who’s offering the card for sale? These are all important questions to be asked.

The biggest problem is for collectors unwilling to do any due diligence or simply being unknowledgable. Pawning off a fake overprint card may be difficult but certainly is not impossible. And the allure of having a potential gem is similar to what some collectors feel when they see a forgery of a valuable card on eBay. The hope, then, is that those instances can be minimized and that more fake overprint cards do not enter the hobby.