Among Duke Tobacco’s many 19th century cards is an interesting set called Yacht Colors of the World. While the set is not as popular with collectors of sports cards, it definitely has a following and I was surprised to not find any sort of in-depth look at it online.

I had heard of this set before but had never looked too closely at it. That changed a while ago when I found a bunch of low-grade examples from the set for only a few bucks a piece.

My personal collecting focus is generally on the four major sports and also on tennis, golf, and boxing. But I’ll gladly pick up 19th century sports cards at that price, even if the sport is more minor like yachting.

Given my collecting focus is really on building sets, when I confirmed that, like many other 19th century tobacco sets, this one included only 50 cards, I was all in. I picked up roughly 40% of the set in one fell swoop and recently completed a trade for eight more. All told, I was able to build about 60% of this set in short order. 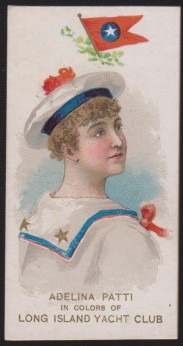 The cards are your typical Duke cards from the time period. Measuring about 1 7/16″ wide by 2 3/4″ tall, they are printed on thicker, sturdier cardboard. That was a model used on a lot of the other cards from that era, including the popular Allen & Ginter cards.

But, what are these exactly? Each card actually features an actress dressed up in the colors of a popular yacht club. I haven’t found any evidence whatsoever that the actresses were members of or formally affiliated with these clubs, though I suppose that could be possible for some. A few of the actresses appear for more than one club.

At any rate, the cards feature color lithographs of said actresses and their names along with a yacht club’s flag and name. Lithography was done by Knapp and Company, a New York based lithographer that also did the work on Duke’s popular N88 Terrors of America cards. Like many other 19th century tobacco issues, backs have a full checklist of the set.

The cards are listed in the American Card Catalog as N91. While there is certainly some difference in the prestige of some of the actresses, you would be hard-pressed to find many sellers familiar with their careers. Similarly, aside from perhaps regional variances, I have not noticed any significant interest based on which yacht club is represented. Because of that all of these cards typically sell for about the same amount. Low-grade examples generally start around $5-$10 with better ones commanding more, depending on condition.

Overall, it’s a legitimate sports issue from the 19th century that won’t cost all that much to build. 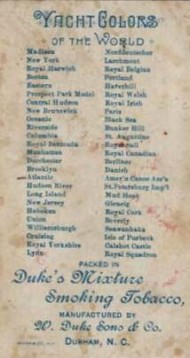 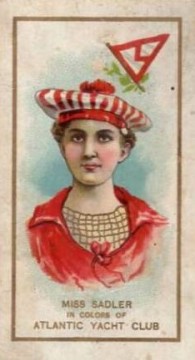 As was the case with the aforementioned N88 Terrors of America set, a few different styles of these cards were issued.

Most N91 cards were packaged with Duke’s cigarette products and that claim is made on the backs of them. However, a similar set of cards (also listed as N91 — technically, the American Card Catalog calls these N91A) was issued with Duke’s Mixture Smoking Tobacco product.

The cards distributed with Duke’s Mixture product use the same images/yacht clubs as the ones in the regular N91 set. But they are distinctly different cards and it’s easy to see that. They are larger in size (measuring 1 3/4″ by 3 1/8″, have a border around the pictures, and have the Duke’s Mixture name on the back as opposed to Duke’s Cigarettes.

Even Jefferson Burdick realized the difference in rarity when he authored the American Card Catalog. Burdick priced the regular cards at ten cents per card but priced the Duke’s Mixture cards at .50. I have a couple of the Duke’s Mixture cards but haven’t seen many for sale. They are quite rare with prices generally two or three times as much as the regular cards. That isn’t really commensurate with the rarity but the reality is that so few collectors could even tell you about this set that the rarity of these is not truly appreciated.

As if this set needed another variation, it has one. A separate classified set known as N140, was also produced.

This 50-card set included the same designs as the N91 cards. But like the Duke Mixture cards, there are some easy to spot differences here, too.

First, these are Duke cards, even though it might not be as evident to those unfamiliar with them. Instead of the Duke name in large letters, backs mention these cards are packaged inside of Honest Long Cut Tobacco products. Honest Long Cut, however, was a brand under Duke and the Duke Sons and Company name is printed at the very bottom in smaller letters.

Also, while the pictures are the same, the design is not. These cards feature an intricate border consisting of oars and rope. Outside of that is a secondary thin blue border. Overall, the cards measure approximately 2 1/2″ x 4″ in size, making them the biggest ones of the three.

These cards are generally about twice as much (in value) as the regular N91 cards.

Finally, like other 19th century cards, an album was created for this set with pictures of the cards in it.

You can sometimes find these ‘cards’ cut out but they will be on thinner stock and be blank-backed. The cut out pictures from this album do have some collector value, though it is pretty minimal. In addition to pictures all of the cards in the set, a few full-page photographs of select actresses were also included.

Additionally, the album contained pages with pictures of cards from two other sets – the Fancy Dress Ball Costumes set (N73) and the Musical Instruments (N82) set.

The album was a special premium offered by Duke to its customers. It could be received in exchange for 100 coupons, which were found inside of the company’s products. While rare to see today, they can be found and sometimes appear up for bid at auction. The album is classified as A34 in the American Card Catalog.

Today, the album generally sells in the $100-$150 range. These albums were often separated and individual pages can sell for $10-$20. Individually cut cards are not worth much more than $2-$3.

Below are the names of the Yacht Clubs represented in the set. Cards are not actually numbered — they are merely presented here in alphabetical order.