The T206 release has become the most popular baseball card set of all time. There are many rare and valuable cards in it but the keys to the complete set are undoubtedly what are collectively known as ‘The Big 4.’ The Big 4 is comprised of the four most valuable cards in the set and also the toughest ones to obtain. In this series, I’ll take a closer look at each of the four cards.

Of players represented in the Big Four from the T206 set, Wagner is by far the most heralded player. With all due respect to fellow Hall of Famer Eddie Plank, Wagner is in another league.

A career .328 hitter, Wagner is heralded as one of the top players of all time. He led the league in hitting eight times and led the Pirates to the 1909 World Series, defeating Ty Cobb and the Detroit Tigers. Wagner was masterful in that series, collecting eight hits and batting .333, further establishing him as one of the best players in the majors.

The Baseball Hall of Fame elected its first class in 1936 and he was voted in immediately, joining Babe Ruth, Ty Cobb, Christy Mathewson, and Walter Johnson. He is still often cited even today as the best shortstop to ever play the game. 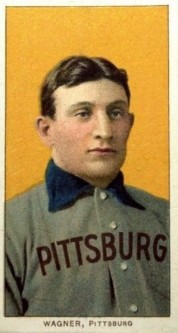 Simply put, Wagner’s T206 is the most valuable baseball card ever made. It is not technically his rarest by definition but with only about 50-75 known, it is an incredibly tough card to find.

For as great of a player as Wagner was, he is best known to many non-sports fans for his iconic baseball card, which has been the subject of documentaries and books. On some level, that is a bit unfortunate as he was a heck of a player with that fact not known to people unfamiliar with the sport. But his card has driven interest in the hobby ever since it was printed and, even today, many non-collectors have at least heard of it as it has frequently made news for its rarity and value.

The card’s importance is understood because of its backstory. Producers of the set planned to include Wagner in it, creating a card for him. However, they also needed his permission to include him and did not receive it. Anticipating his acceptance, the card was designed and even printed with some of them making their way into packs of cigarettes. But Wagner ultimately did not agree to appear in the set and the American Tobacco Company was forced to stop issuing the card. They certainly did so fairly early in the process but a good amount still made their way into the public before the card was no longer produced.

The reasons for Wagner not wanting to be in the set are not entirely clear. The most commonly-cited reason is that Wagner did not want to be associated with tobacco. While that seems to make sense as he did not appear in many other popular tobacco card issues. But Wagner’s likeness did appear on a few other tobacco products, including cigar labels and on a rare card issued by a cigar manufacturer. Wagner did use tobacco himself but some have argued that he did not want to promote that use to children.

Some have cited the tobacco issue with a twist, believing that Wagner did not have a problem with cigars or chew but did not want children buying cigarettes (which some were) in a desire to find his card.

Another line of thought is that Wagner simply wanted more money to be in the set. Some sources have gone so far as to call him a shrewd businessman and recognizing his worth.

That could be true. However, it is interesting that Wagner would have agreed to be in so many candy card sets and not the major tobacco issues. If this was all about the money, I would expect him to appear in an equal distribution of sets — some tobacco, some candy. Because of the imbalance that exists, I’m not certain this was about the money.

It is interesting to imagine what the Wagner card would have been worth had it not been shortprinted. But while that may have been beneficial to collectors wanting the card, it would have left the card out of the spotlight of media. Sure, I suppose a different card would simply be pushed as the most valuable of all time. But the shortprinting of the Wagner and the intrigue behind it has also helped the hobby immeasurably from a publicity standpoint.

Because of its value, the card has been heavily faked through the years — possibly more than any other card in history. Legitimate reprint issues have been created but many unlicensed forgeries exist (and as I cover here, there is a difference between reprints and forgeries). Collectors should know that the Wagner card is known only with two different advertising brands on the backs — Sweet Caporal and Piedmont. Further, he is found with only a 150 Series back as the card was pulled before additional printings were created.

In comparison of the two backs, most known Wagners have been found with Sweet Caporal advertisements. Wagner cards with advertisements on the back for different brands, such as Old Mill, Sovereign, Drum, or one of the many others used in the set are not known to exist.

As stated, the card is pound-for-pound, the most valuable one in the hobby. One sold for $3.1 million in 2016, which is the highest price on record to be paid for a baseball card. Whether or not another card ever sells for more money is unclear but seems quite possible.

The 1952 Mickey Mantle card, for example, is often touted as one that could as one came close recently. However, in the case of that card, it is only the highest-grade Mantles that could surpass Wagner’s lofty amount. A Wagner card in the same grade would sell for much more than the Mantle.

The card is also incredibly rare. To date, only about 50 have been graded by PSA, SGC, and Beckett and, as you can imagine, few would exist in raw, ungraded form.