What if the Honus Wagner T206 Wasn’t a Short Print?

How much would the popular card be if there were a lot more of them?

The Honus Wagner T206 is the most famous card in history. Most recently selling for more than $3 million, it is known even to those that don’t collect baseball cards.

But, what if the card wasn’t a short print? Before we contemplate that, let’s back up a minute.

We all know the rough story of the card. Wagner’s T206 card was produced without his permission. The Pittsburgh Pirates star likely was not real happy. It is widely believed that he didn’t want his image associated with tobacco products but that doesn’t make perfect sense because he was in other tobacco card issues. Some have said that the tobacco-using Wagner had a particular problem with the cigarette cards and that they were marketed to children.

Whatever the reason, we know that production on his card was halted relatively early in the printing process. As a result, there are not many of the cards around and that, along with the backstory, has driven up the cost to insane amounts, despite the fact that many rarer cards exist. In short, it is the most popular card in the most popular set of cards of all time.

Wagner’s card was shortprinted but what if it wasn’t? I mean, what if it was no different than any of the others in the set and produced in large quantities? If that were the case, I think it’d be pretty easy to determine a value of sorts.

At the time, Wagner was one of the most popular players in baseball. In 1909, when the T206 set’s production began, his Pirates had just won the World Series, defeating Ty Cobb’s Detroit Tigers in seven games. Despite the fact that he was 35, Wagner was spectacular, hitting .333 and three of his eight hits were for extra bases. 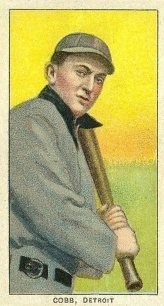 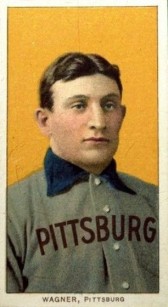 A good indication of where the card might be is to look at his other issues in other sets. In other sets, Wagner cards rank favorably with Ty Cobb cards. Those two are often the biggest stars in other sets and their cards are usually neck and neck with Cobb generally holding a slight advantage. Cobb’s T206 cards, however, are highly popular and well above other big names, like Christy Mathewson, Walter Johnson, and Cy Young, among others.

Given where Cobb’s cards are compared to other big names in the set, I’d expect Wagner’s to be just below his as well — but not by much. Poor versions that aren’t utter beaters for, say Cy Young, start around $500-$600. Others, such as Johnson and Mathewson are in similar ranges. Given Wagner’s popularity in other sets, I’d place his cards ahead of those and in that ballpark. That’s speculative, of course, but given the popularity of Wagner cards, probably in the neighborhood of where you could expect to find it.

One monkey wrench is that, assuming Wagner had only one pose, it’s possible his card could be worth more. All of the aforementioned players have more than one card and if they had only one, I could see a premium being attached to it. Wagner could have later gotten another card but if he had only one, I could also see it as worth slightly more.

Ultimately, the rarity of the Wagner is great for the hobby. But, man, it would be great if his card in the set wasn’t shortprinted and could more easily find its way into the hands of collectors.