While only one overprinted N284 Buchner Gold Coin poster may have been known, we now have proof that more existed

The cards are somewhat rare with low-grade commons starting around $75-$100 for the most part. However, while this is a pretty standard set, overprinted poster cards are known to exist.

Several sets are known to have poster cut cards. Poster cuts are generally cards that would have been hand cut by collectors from some sort of advertising poster. The practice was quite common back in the day and even things like premium books with pictures of cards were cut up quite a bit. Here is an example of some E121-like poster cuts that have similar overprint on the front.

Anywho, the N284 Buchner poster cuts are a little different. At least the overprinted ones are — more on that in a bit.

Most advertising posters had blank backs. After all, they were hung in windows and whatnot and the back of them wasn’t important. But the Buchner Gold Coin Tobacco overprinted posters actually were printed on uncut sheets of actual cards. Shown here is a copy of one I recently picked up.

Unlike other posters, these weren’t merely pictures of the cards — they were actually cards. The stock is a little thicker than the regular cards and that was probably done for durability concerns. But these were real, honest-to-goodness cards and we know that because the backs had the same regular Buchner Gold Coin Tobacco advertisements on them.

Essentially, the company would have printed out uncut sheets of the cards and then applied the overprint to them.

You can actually see what most of a full poster with the overprint looked like here. The top part is missing but the poster mostly read, “Gold Coin Chewing Tobacco Portraits of the Leading Base Ball Players in Full Uniform” and then had the “D. Buchner & Co., New York” name at the bottom.

To date, that was the only overprinted poster I’d seen for the issue. Other posters do exist (more on those below) but in terms of the overprinted ones, I’ve not seen another.

But we can definitively say there was at least one more of the overprinted posters. 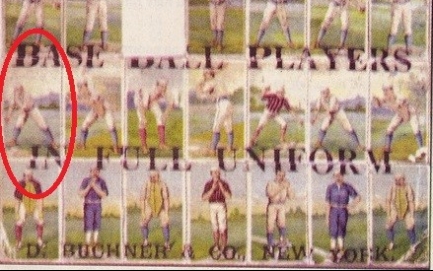 Shown here is a close up of a portion of that poster from the earlier link above. If you look closely, you can see the location of where my card would have been on such an advertising sheet. I have circled the card in red.

As you can tell, it is in the same location on the sheet as mine is, which is evident from the bottom of the ‘BA’ printed at the top and the top of the ‘IN’, which is printed at the bottom. And as you can also see, it is clearly a different card from the one I recently acquired.

The fact that a different card is used on this specific poster tells us that there were undoubtedly additional overprinted advertising posters using cards of different players.

And that’s a pretty cool thought.

See, the set included all kinds of big names, including Cap Anson, Tim Keefe, Buck Ewing, Charles Comiskey, and more. And that means some of those players and other big names could be found with the black overprint. While any overprinted card is pretty cool and relatively difficult to find, one featuring a major star would be even better. And now that we know that multiple posters would have existed, that means that many (if not all, even) of the bigger names could have overprinted versions.

It should also be noted that the N284 Buchner Gold Coin cards were advertised on at least two other styles of posters than the ones featuring the black overprint on cards.

This poster shown here actually promoted not only the baseball players, but also the policemen, jockeys, and actors also found in the series. And a second type of poster is also known that produced blank-back specimens without the overprinting. A good number of blank-backed cards have been found in addition to the ones with the overprint on the front.

It is possible that some of the overprinted cards with blank backs could exist. However, to date, the ones I have seen with the black overprinting have all had the fully printed advertising backs.