Where are All of the R318 Batter Up Premiums?

Despite Being Advertised with a Popular Card Set, these Premiums are Difficult to Find

The R318 Batter Up set is a large, 192-card series produced from 1934-36. The cards were issued by National Chicle for their Batter Up gum product. Along with the cards, National Chicle also offered a large set of premium photos.

The premiums are generally cited as the ones found in this Old Judge auction. A nice copy of Lloyd Waner’s photo sold for more than $1,300, showing there was plenty of interest. Because the images from those photos are the same as the ones on the regular cards, most have simply assumed these are the corresponding premiums.

That assumption, in my opinion, is probably wrong, however.

Many premiums back in the day were part of some sort of redemption program. A collector would save a bunch of wrappers of a product as a proof of purchase type of deal and then send them in to a company to receive an item. These premiums, however, were part of a regular, everyday purchase. At least they were supposed to be. We know that because the premiums were mentioned on wrappers of some of the Batter Up products. More specifically, as REA states here, they were offered with the High Number series cards.

Shown here, this wrapper indicates that collectors were getting quite a deal. For exactly one cent, the buyer was entitled to a piece of gum, an R318 Batter Up card, and one of the large premium photographs. That’s some sort of bargain, right?

Batter Up cards themselves are not too difficult to find. Now, the high-number cards packaged in this wrapper are tougher than the low number cards. But they aren’t impossible. Briefly eyeballing their pop report, PSA has graded somewhere around 3,000. Somewhat tough, but by pre-war standards, there are plenty out there. However, the supposed premiums are another story entirely.

To date, only a handful of the ones often cited as the premiums (i.e. like the one in the Old Judge auction linked above) have been found. Six are in the known checklist and you very rarely ever see one. Even more problematic is that the wrappers mention a whopping 1,200 that are supposed to be available in the set.

So what gives? I mean, if the photos were issued at the same rate as the cards, there should be about as many of them, right?

In short, it’s one of the hobby’s great mysteries. But it appears likely that what are commonly referred to as these Batter Up premiums aren’t actually the same ones mentioned on the wrapper.

Where Are The Actual Premiums, Then?

As I theorized in a Net54 post recently, it is quite possible that another issue was in fact the set of premiums distributed by National Chicle. That seems far more likely because, after all, the premiums should be at least somewhat as plentiful as the high-number cards with which they were issued.

So what sets could have been the ones mentioned on the wrapper?

My first thought was something like R312 (pictured to the left here). That set is known only as the Colored Photos set and was also produced by National Chicle. Not only were they printed by the same company that printed the Batter Up Cards but they were issued during the same time period.

But another, more intriguing issue is actually the R313 Fine Pens (one of those is pictured on the right). Also produced by National Chicle at the same time, this set actually holds a little more weight because Jefferson Burdick called them a ‘Batter Up’ issue in the American Card Catalog. As a Net54 reader pointed out to me, Love of the Game Auctions has also mentioned these as a possibility for the premiums.

The words on the wrapper called these premiums, “Large Photo Art Pictures” and, I have to admit, the R313 National Chicle fine pens don’t really look like that to me. That description sounds like something much closer to the R312 Colored Photos and I assumed that Burdick’s designation of them as a Batter Up issue indicated they were simply another Batter Up Issue. But Burdick’s designation of R313 as a Batter Up series could indicate he knew something we didn’t.

My personal inclination is that one of these two series’ are the actual premiums mentioned on the wrapper. Which one is anybody’s guess but Burdick’s designation of the R313 set as a Batter Up issue probably gives that idea a bit more credence. Neither matches the promised checklist of 1,200 photos as mentioned on the wrappers but, as we’ve seen with all sorts of issues, planned checklists don’t always pan out. That number to me is a non-issue because there is not any other National Chicle set with nearly that many subjects. 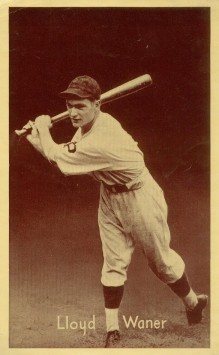 If one of those issues is the missing Batter Up set, then what exactly are the scarce photos that are currently being called the photo art premiums?

No one can say for sure but, due to their scarcity, they are likely another premium entirely. When or how they were offered is a complete mystery but they are probably not the premiums mentioned on the wrapper.

Now, they are almost certainly some sort of a Batter Up issue. We can surmise that because the ones that have been discovered as they share the same images on the regular, smaller cards.

Because of their scarcity, they could be any number of things. I suppose they could even be a promotional type of release. No one can say for sure. But the idea that they are the same premiums as offered on the Batter Up wrappers simply doesn’t make much sense.

Still, that isn’t to say they shouldn’t be desirable. To the contrary. They are certainly far more scarce than the R312 Colored Photos and the R313 Fine Pens and will continue to command quite a bit of money in the open market on the rare occasions they are offered.