That set, of course, isn’t nearly as prestigious as the all baseball set. But it is special as it was one of the first major multi-sport issues. Multi-sport sets, of course, were nothing new. Allen & Ginter, Kimball, and Goodwin were producing them about 40 years earlier in the late 1800s and several others continued after that. But the Sport Kings set was a step beyond those as it included things like professional football and basketball figures, in addition to a slew of others. Baseball was included but was only a small part of the set with three players, in Babe Ruth, Ty Cobb, and Carl Hubbell.

Strangely enough, it’s possible to theorize that Cobb’s inclusion actually cost collectors from a potentially very special card being made.

This all is tied to the 1933 Goudey baseball card set, really. That set famously did not have a card No. 106 in it and it almost certainly was done intentionally to drive sales and force collectors to buy more packs. We know that because the spot on the sheet that is supposed to occupy Cobb included a second No. 144 Babe Ruth card. Since the No. 144 Ruth card was already on that sheet, that card was double printed and it’s hard to imagine that no printer would have noticed that something was amiss with the card appearing twice.

I suppose you could make the argument that other cards for Lou Gehrig and Jimmie Foxx, while using the same images, also had different card numbers. Thus, even seeing the same picture on the same sheet might not have triggered the printer’s alarm that something wasn’t quite right. But I find it hard to believe that Goudey itself would not have noticed the error. Especially when they’re finding and correcting far less noticeable errors, such as Jimmie Dykes’ age in his biography.

You know the rest of the story. The lack of a No. 106 sent collectors writing to Goudey and, relenting, the company printed a No. 106 card in 1934, mailing it to those that asked for it. Problem is, if there was no plan to distribute a No. 106 card, that meant one had to be created.

Goudey, at some point in the process, decided to print a card of Lajoie to fill the hole. Whether they always intended to use him or whether it was a last-minute decision remains unclear to this day. But Goudey selected Lajoie for the card.

Lajoie, of course, was a fine selection. Hall of Fame player that was so popular that his Cleveland team name was even changed to the Naps in 1903. They would become the Indians in 1915 after someone likely decided that naming an entire team for one player probably wasn’t a great idea when Lajoie went to the Philadelphia Athletics. 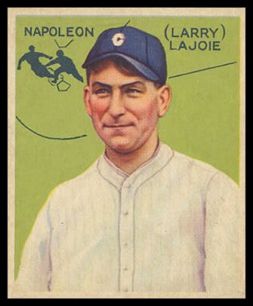 His selection, though, was kind of odd, to be sure given the time period. After all, while Lajoie was a legendary player, his career had been over for nearly 20 years. When the 1933 Goudey set was printed, Lajoie would have been either 59 or 60 years old, for crying out loud. Surely a more contemporary player could have been used and there were several available choices that would have made sense.

One of those choices was Cobb.

Now, Cobb was out of baseball by 1933, too. But the thing is that he had left the game after 1928 so he was a much more recent player. Cobb’s name surely still carried weight because he was included in Goudey’s Sport Kings set. But my guess (admittedly, with little basis) is that, if Goudey really left No. 106 open, he could have been strongly considered if not for his placement in the Sport Kings set.

Couldn’t he have been in both? Sure he could have. After all, the other two players in the Sport Kings set, Ruth and Hubbell, were. The difference, though, was that Ruth and Hubbell were still active players at the time while Cobb was not. The idea to place him in only one set (just as it was to leave Lajoie out of the Sport Kings set) was probably somewhat calculated so as not to lessen the impact from using a past player. Use them in both sets and I don’t know how special it is anymore.

If Cobb was indeed passed over for Card No. 106 because he was in the Sport Kings issue, that’d be kind of a shame. Lajoie’s card is special – it’s even one of the top pre-war cards of all time. But can you imagine the kind of demand there would be for that card if it was Cobb instead? The value is already off the charts high for it so I’m not sure we can say it would double or anything like that. But it would no doubt be more desirable than a card of Lajoie – especially because Lajoie had been out of baseball for so long.

Now, don’t get me wrong. The Sport Kings Cobb card, while beyond his playing career, is a nice one. I personally like it. And, as I said, there’s really nothing to go on in trying to determine if Cobb could have been the player used instead of Goudey. But the idea of Cobb as the shortprinted card in the 1933 Goudey set would be on an entirely different level.