A Fresh Look at the Confusing E122 American Caramel Checklist

The checklist for a rare set needs some work

The 1922 E122 American Caramel set is a rare issue, to say the least. Despite having only ‘around’ 80 cards (we’ll get there in a minute), it is extremely difficult to assemble a full set because of its rarity.

The cards are generally tough to find. Not impossible, really. But you’ll see far less of them than most other American Caramel sets. Putting together even team sets can be a difficult task, to be honest. Even on eBay, you aren’t likely to see more than a few dozen at any given time.

A pretty established checklist had been developed for E122 and was accepted as being mostly correct. But some digging on the matter seems to indicate it needs some work. PSA and SGC have not even combined to grade 300 cards and, as we’ll see in a little bit, some of those cards have probably even been misidentified.

A story of three sets, not one 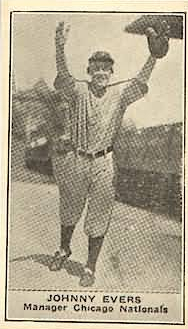 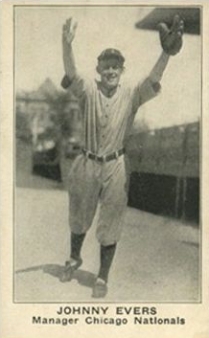 This article is about the checklist of the E122 American Caramel set. We’ll get there, I promise. But the only way to really discuss that topic is to consider at least two other sets – American Caramel’s E121 issue (specifically, the Set of 80) and National Caramel’s E220 set. You could also throw in the W575-1s, which are essentially blank-backed E121 cards, if you were so inclined. For now, though, let’s just keep this to E121 Set of 80 and E220.

All three of these sets were part of sort of a change that was coming to baseball cards. American Caramel had, like most companies, printed smaller, color lithographic cards in the early 1900s and 1910s. But after World War I ended and we got into the 1920s, a lot of cards had a different look. Companies moved to larger cards that often used real black and white pictures instead. That’s what we’ve got with these cards.

So, what do those sets have to do with the E122 checklist? Probably a lot due to their design similarities. Pictured here from left to right are E121, E122, and E220 cards. As you can see from the pictures, the designs are very similar. That has likely led to some checklisting problems of the E122 set.

E122 and E121 Set of 80 (a separate E121 Set of 120 was also produced but not really necessary for this discussion) have similar checklists. Now, more E121 Set of 80 cards have been confirmed. But every known E122 card is also found in the E121 Set of 80. Not only that, but the pictures were the same for the players included. Two slight alterations, though, makes them different from each other. The E122 cards have the player information at the bottom in a box and the photos have a different appearance, looking as if they were placed behind a screen or filter. E122 is similar to E220 as well – mostly because of the box at the bottom. Some folks have incorrectly identified these cards. 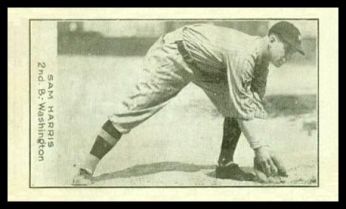 I received an email from long-time collector Dan McKee the other day asking about one of the cards on the checklist, Sam Harris. Harris is found in the E121 Set of 80 and has been listed as having an E122 card as well. However, if you ask anyone for the E122 card, no pictures of it can be found.

The interesting thing here is that Sam Harris is actually Bucky Harris and incorrectly named on the card. That is important beyond just the fact that it was a mistake.

That error occurred on his E220 National Caramel card, shown here. And that is a big deal because, according to E122 checklists, the same error supposedly occurred on he E122 card that no one can seem to find. But again, those cards virtually identical in design. It is quite likely that checklisting efforts misidentified his E220 card calling it an E222 issue.

And given that efforts to find this card have come up empty in recent years by many people, this is almost certainly a checklisting error.

Once I got Dan’s email about Harris, I began wondering if others were missing in action. What I found out was that is almost assuredly true.

One card that may have been checklisted by mistake as well is an issue of George Sisler. In particular, it’s his batting pose that seems off the radar.

For starters, the card has not been graded by any of the big three grading companies, PSA, SGC, and Beckett, and no trace of it seems to be anywhere. While the cards are rare, almost every confirmed card (if not every one) has been graded at least once. This one, so far, has eluded all three graders.

You know what I did find, though? You guessed it. A mistake by a different grading company. I managed to find this Sisler card shown here that was graded by GAI. It was graded as an E122 even though it is clearly an E121. And while this card is from GAI, other known categorization errors from other graders for these cards exist as well. That means that, while the population reports for these cards may be mostly pretty accurate, they could certainly a little off.

But leaving the graders out of this, my larger point is that checklisters may been duped as well. Now, it is possible that this card exists. But until one is seen, I will have my doubts.

Wait, there are more of these? Yes, a few. A handful of other cards could not be found by Dan, who has spent years looking for them. After looking for myself, too, I have come up empty.

That is not to suggest that two people not finding these cards means they are not in the set. But given his expertise with this set and the issues with some of the other cards, I think their presence on a checklist should at least be called into question until they can be visually confirmed. That is particularly true as only Harris from this list has been graded (one, by SGC) – all others have no graded copies. And as we’ve been over above, Harris’ inclusion does not seem likely.

In particular with Fred Schupp, too, it should be noted that the Standard Catalog of Vintage Baseball cards, while listing him in the E121 Set of 80, says his existence in that set is in question. Like Harris, if he’s not there, he’s almost certainly not in E122.

It is possible that a few of these cards do exist. However, until I can see one of these cards, given the other errors, I’m not fully convinced they exist, either. I’m not ruling out their existence entirely. But given all we know now, definitively adding them to any checklist seems a little careless.

All other cards on the expected checklist have been confirmed.

So, we may be taking a chunk of cards off the checklist. However, we’re adding a few, too. Both have been discovered this year and were found by Dan.

Back in May, he discovered a Hughie Jennings card that went largely under the radar on eBay. Dan also identified a Nemo Leibold card that had previously eluded checklists and that I could confirm.

Those two new additions bump our confirmed checklist back up.

With all of these changes, I’m presenting a revised checklist below. These are cards that have been confirmed. As with anything here, feel free to drop me a line if you can confirm any of the missing cards or have others to report.

The set advertises 80 cards (more specifically, 80 players) and our updated list has 79. But given that two new ones were just reported this year that were not previously checklisted, it is likely that others like that exist given the rarity of this extraordinary set. And finding one more card does not guarantee the checklist is complete, either. The E121 Set of 80, after all, is believed to contain more than 80 cards.

Finally, one additional note applies to the card of Ferd Schupp. As this auction claims, his card is the only one in the set without the box at the bottom. However it is most certainly an E122 card as confirmed by the advertisement on the back as well as the screen/filter picture used.