The R873 trade card set features the rough and tumble game of early football. While I had only previously ever seen two cards, a third added to the checklist not only expands the set but provides some clarification.

I found the third card to this set like I have for many other early, rare issues – on eBay. With numerous searches set up, I don’t hit everything I’m looking for. But in checking them regularly, I’ve discovered several other trade cards not widely known to exist.

Earlier this spring, for example, I found a third card in the H804-41 set, a women’s baseball issue cataloged by Frank Keetz, that was not previously checklisted. Only a few weeks later, I found a fifth card in the H804-39 Pink and Blue baseball series that was also not checklisted. Additionally, I’d even found one of the poses used in that set in another trade issue.

Trade cards have been well cataloged but due to their abundance, there simply will never be a fully confirmed list of all of them. So many existed and that leads to new ones being found from time to time. 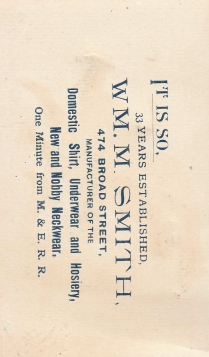 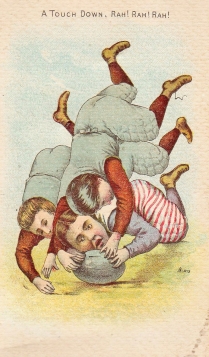 As a point of clarification, while the R873 football trade cards have been seen before, I’ve never seen a formal name for them. That’s led me to calling this the ‘R873’ series as a small R873 print (with the ‘R’ in a triangle) is found on them. If you’re unfamiliar with these cards, you can read more about them here.

In short, this is a set of Victorian football trade cards believed to date to the late 1800s like most other trade cards. Nailing it down a little more specifically, the heyday for trade cards was somewhere around the 1870s through the 1890s. They did exist before and after those times but that’s when most are believed to have been printed.

I found this card pictured here and had not seen it before. While I’d seen the other two examples in the set a few times, I was not aware that a third existed. It is possible, of course, that even more are out there. But they are so infrequently seen that it is difficult to tell or even theorize about a potential complete checklist.

Like the other cards, this third card features players in gray uniforms with red sleeves and players in a striped uniform with gray sleeves. Here, three players are diving to possibly recover a football on the ground or strip it away from a striped-uniform player. The card is the same size and with the same type of font as the others in the series, making it an obvious addition to the set.

The card features the title, ‘A Touch Down, Rah! Rah! Rah!’ That title, by the way, is pretty important.

The title on this new card mentions a touchdown has been scored. Turns out that title is key because it helps distinguish the card as an American football issue instead of an international rugby one.

Now, the cards I’ve seen have all had American advertisements on them. This one features an ad for William Smith, a clothier for shirts, underwear, hosiery, and neckwear located on Broad Street. While the location isn’t given, the other cards I have mention a coal and wood dealer in Albany, New York.

Because of those ads, I’d already classified the sport being depicted as an American football one. It was always possible, albeit unlikely, that the players featured were playing international rugby instead of the more localized American football, which was derived from that sport. After all, other international pre-war cards did often depict sports not necessarily in that country.

However, the use of ‘touch down’ makes it clear that this card features American football players.