I’m a sucker for unique poses in pre-war sets. Recently, I wrote about the George Wood horizontal card in the 1887 N284 Buchner Gold Coin set. Another great one is the Jack Barry card in the T207 set.

The T207 Brown Background set is known for its sharp contrast to the more colorful and star-studded T205 and T206 issues. Despite being significantly rarer, T207 is significantly behind those two sets in terms of popularity.

Most T207 poses, if you’re unfamiliar with the set, are either portrait shots or half and 3/4-length body shots of players. One, though, was a horizontal pose. 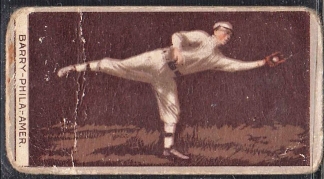 orizontal poses are unique and generally sparse. T206 has six of them and they generally bring a small premium over other commons in the set. The portrait-based T205 set has none.

The Jack Barry card in the T207 set is the only one in the release with a horizontal picture. In the shot, he is stretching out to secure a ball. It’s a particularly great pose because it not only shows him making a nice play on the ball but it’s also dramatically different from the rest of the set, which are all vertical cards, often with no action shown.

One great thing about the Jack Barry card is that it isn’t super expensive. Like any T207, there’s a degree of rarity with it. PSA hasn’t even graded 50 of them to date, so they’re not going to be found in every card shop around. But you can usually find one on eBay without too much trouble and lower-end ones are under $50.

Another great thing about the Barry card? Barry was actually a pretty good player. He won four World Series in his career, three with the Philadelphia Athletics and one with the Boston Red Sox. Known for his defense, he was part of the Athletics’ famous $100,000 infield, joining Stuffy McInnis and Hall of Famers Eddie Collins and Home Run Baker. 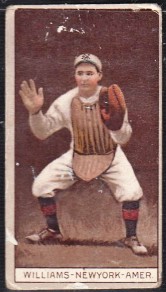 There are other full body shots in the set – 21 others, to be exact. And they are some really nice shots to be honest.

Armando Marsans the Hall of Fame Cuban pitcher shows him making a pitch. In another, catcher Bob Williams appears to be readying for a throw home. Both are shown here and were refreshing given that much of the rest of the set features a lot of close-up and less interesting pictures. The two most notable full body shots, however, belong to Hall of Famers Chief Bender and John McGraw.

But Barry’s is distinct in that it’s a unique picture and one with a horizontal layout.

In short, it remains one of my favorite cards in the set, even though it isn’t necessarily a key card in a set full of difficult short prints and back variations.