The T212 Obak set often gets overlooked for a few reasons. Produced from 1909-11, it parallels the same time period of the wildly popular T206 set and using color pictures and a similar format, the cards even look somewhat similar. However, the set still doesn’t generate anywhere near the level of enthusiasm as T206.

The biggest issue most collectors have with the T212 set is probably because it features only minor league players. Some players, such as Buck Weaver, did get to the majors and the set has a few recognizable names. But most of the release has names of players that aren’t too familiar with even pre-war collectors.

Another issue for the weak popularity of the set? Probably the fact that it includes three separate issues. That in and of itself won’t deter collectors but when you couple it with the fact that most of the players are familiar, it doesn’t help. The three sets were all cataloged by Jefferson Burdick as T212 and the result is a massive 426-card set.

Weaver’s card is probably the key to the entire set but a second isn’t far behind – the card of a mysterious player named Ten Million.

First, the obvious question – was that his real name?

Dude’s name was legitimately Ten Million. Million was the family’s last name and, according to his daughter, Ten’s mother had a ‘penchant for the unusual’ as this book states. Other sources, however, say that it was his paternal grandmother who came up with the name.

Million had a, pardon the pun, million dollar name, but was only a modest ballplayer. He never batted .300 and never reached the major leagues.

An outfielder, he debuted in 1911 with the Victoria Bees. That 1911 date is important because the Obak cards were produced from 1909-11 and that meant he just made the cut. The 1911 Obak cards aren’t only rookie cards because they were his only cards (more on that in a bit) but they were actually real rookie cards as they were from his first real season as a baseball player.

Million debuted in 1911 at the age of 21 and had a fairly promising season. He batted .275 and had 181 hits for Victoria in the Northwestern League. Unfortunately, he was one of the few bright spots on a pretty bad team that finished dead last with a 41-125 record. The Bees finished an appalling 63 games out of last place behind the Vancouver Beavers in the league that featured six teams from Canada and the pacific northwestern United States.

In 1912, Million nearly made it to the majors. He made the St. Louis Cardinals roster in training but an injury prevented him from game action. He would go on to play for rival Tacoma in the Northwestern League for part of the season and also played for Sioux City in the Western League, having mixed success. He thrived with Tacoma, batting a career-best .287 but struggled badly with Sioux City, hitting only .200.

His 1913 stats aren’t available but he suited up for Tacoma and Spokane that season. 1914, his final year as a player, saw him again with Tacoma and also with the Moose Jaw Robin Hoods out of Saskatchewan in the Western Canada League. Million batted .232 with Tacoma and performed better with Moose Jaw, hitting .266.

Knee problems ended his career after that season. In all, he had appeared in 692 games, all in the minor leagues.

After his career, Million did a stint in the Army and then remained somewhat in the sports industry. He sold sporting goods for equipment manufacturer Spalding and, in addition to serving as an umpire in semipro baseball, he also officiated other sports, including football and basketball.

His name also seemingly garnered him more publicity when he went into auto sales working for Ford. Ford produced its ten millionth car in 1924 and some reports suggest that it was actually sent it to Seattle where Million was working so that he would be the salesman. That part is unclear, however. Some reports, like this one from the Herington Sun, said that the car was to be driven from New York to San Francisco on an exhibition tour. Perhaps it was delivered to Seattle after that, however.

He died in 1964 in Anacortes, Washington. 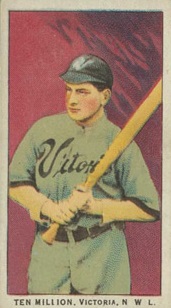 If it wasn’t for Obak Cigarettes, safe to say his career would have been even more hidden from the public. That’s because Million only appeared on two different cards and both were for Obak.

The first, and most popular, is the T212 Obak card. That features Million as a member of the Victoria Bees during his rookie season. Like other T212s, it included a color picture of Million with a white border around the front.

The card, overall, is very attractive. It features Million, choking up on the bat and has a deep red background. One of the great things about it is that Obak printed his full name, Ten Million, at the bottom. Most other T212 cards simply gave a player’s last name. Perhaps recognizing his name was so unusual, they wanted to feature it.

Million’s other card is an Obak T4 cabinet issue. This one is far less popular mostly because it is much rarer. The T4 Obak cabinets were larger premiums and not included in Obak packages. Consumers had to mail away for them and while Million is listed as an option that could have been selected, I don’t believe one has ever even been verified. If the card was ever seen, it would have featured a real picture of Ten Million as those cabinets were the original pictures used to the create the T212 cards.

If his card was not requested by a consumer, his T4 cards likely would not have made it into the public and may not have even been printed at all. It is quite possible that the only cards of Ten Million are his T212 Obak tobacco issues.