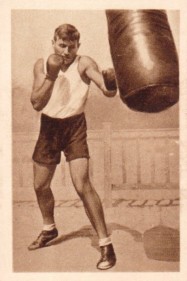 This was a massive set of small sports cards produced by Monopol, a German cigarette company. The cards were packed inside of all of the company’s brand products, as indicated on the backs. The company had six brands where the cards were to be found:

The cards in the set were extremely basic with only a black and white image of an unnamed athlete. The backs included an advertisement for Monopol’s products as well as the athlete’s name, a short biography, and a card number. The biography, of course, is in German. Of note is that the cards are incredibly thin and fragile, though they are often still found in nice condition, anyway. They are almost paper-like in appearance.

A total of 720 cards are known in two series (Series A and Series B). The images could be characterized as black and white or sepia. Really, they have almost a faint pinkish hue to them.

Sports represented in the set included boxing and tennis, among others, such as soccer. One of the featured stars was Hall of Fame boxer Max Schmeling. In addition, an album for the cards was available to collectors.

A complete checklist for this set has not yet been developed.