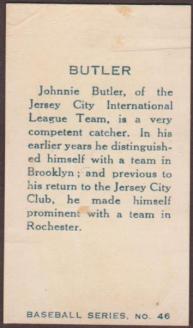 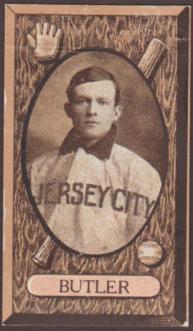 Collectors might be inclined to focus only American issues when it comes to tobacco cards. But there are a fair share of international tobacco cards as well. Canada has one such pre-war product with its C46 Imperial release.

The 90-card set is often ignored. It features mostly minor league players and the cards aren’t as plentiful as other U.S. tobacco cards, such as the T205 or T206 sets. Really, the set has more of a look similar to the darker, more mysterious looking T207 issue. But collectors of the T206 set will recognize many of the names as they were subjects in that popular release as well. As Canada’s only pre-war tobacco baseball card issue, it’s worth a look.

The set has several things going for it. First, it has a somewhat unique design and some recognizable names. Plus, with a modest 90 cards, it’s not a bear to complete. The hardest part is finding all of the different cards, and some, certainly, are hard to find. Still, most are plentiful enough that it makes completing a set realistic.

The aesthetics of the set aren’t wildly popular, but they aren’t terrible, either. The cards are presented to depict a player on a plaque of sorts with a faux wood-grain background and a name plate at the bottom along with their portrait. Backs are helpful with a biography, something rare on tobacco cards in that era, as well as a card number.

The C46 set includes only last names – at least with the exception of only a few. For some reason, James Murray and Tony Smith are the only players in the set to have their first and last names printed on the front.

The set is significantly different from other American tobacco issues. Here’s a closer look at some of the differences.

Also, while the players are from the International League, many went on to play in the majors. In addition, there are two Hall of Famers present in Joe Kelley and Iron Man McGinnity. McGinnity was a player-manager with Newark while Kelley was the manager of the Toronto team. Kelley’s card should not be confused with Jack Kelley, who was a player in Newark and also in the set. Adding to the confusion is that Joe Kelley’s card is an uncorrected error with his first name being spelled ‘Kelly’ on the front.

Finally, there’s Chick Gandil, the famous/infamous member of the 1919 Chicago Black Sox team. His cards are always a hit and this one is no exception.

Here’s a closer look at the set’s ‘Big Three.’