The 1912 C46 Imperial set has one main claim to fame – it’s recognized as the only Canadian tobacco baseball card release. There are a fair amount of Canadian baseball cards but the C46 release is considered the only one that solely features baseball players and was released by a tobacco company.

The set is often overlooked. It’s not colorful, like other tobacco issues, and the cards have a fake wood backdrop that looks like a cheap plaque you might win from your local Boy Scouts troop. But more importantly, it’s a minor league set that includes many unrecognizable names. As I’ve written before, it’s a little different.

In it, though, you’ll find three big stars that a lot of collectors are after. 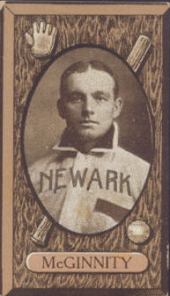 If you’re looking for the key to the set, there are three of them, to be exact. Two, are Hall of Famers and the first is Iron Man McGinnity.

McGinnity curiously finds himself in the set after his major league career was over. That wasn’t too uncommon, though, as many players continued playing in the minors after the majors. McGinnity’s last year in the majors was in 2008. But at 37, he must have felt like he could still play.

Turned out, he was right.

His card isn’t an easy one to find and especially not for under $100.

The next Hall of Famer available in the set is Joe Kelley. Kelley, in fact, is the only other Hall of Fame player in the entire set.

Kelley looks more like a preacher than a baseball player on his card. But that hasn’t kept it from being any less desirable. Like McGinnity, Kelley’s major league career was long since over. Interestingly enough, Kelley also ended his major league time in after the 1908 season.

However, he didn’t take quite the same path as his contemporary. Instead, Kelley played only two more seasons in the minors as a player manager, then served purely as the team’s manager for a while. He would go on to become a scout and coach, remaining in baseball until the 1920s.

Two things are notable with regards to his card. First, Kelley’s name, as you can see, is actually misspelled as ‘Kelly.’ And second, unlike other typos, that’s pretty important because there is another Kelley (Jack) in the set. As the player’s last name is only on most fronts, collectors should be careful to get the right one. Jack Kelley’s card has the correct spelling of his last name so it’s easy to get confused if looking for the card online where you can’t see the back that has a biography.

Kelley’s card is mostly in the same boat as McGinnity. Maybe slightly cheaper as he’s not pictured in uniform and is instead only wearing a suit. But it’s still relatively tough to find it for $100 or less.

Gandil was a fine ballplayer but his real claim to fame is being a key member of the infamous 1919 Chicago Black Sox team that threw the World Series. Gandil was not only a player involved but was often seen as the ringleader. That has made his cards highly sought after.

Unlike Kelley and McGinnity, Gandil’s career wasn’t ending, it was beginning. In 1910, he played about half a season with the Chicago White Sox before playing in the minors in 1911 with the Montreal Royals.

He’s pictured on the card in his Montreal jersey. He would spend part of 1912 with the same club as well but played exclusively in the majors after that. He would be a productive player until he was banned by the league.

Despite not having a Hall of Fame career, Gandil’s tie to the 1919 Black Sox makes his card extremely appealing. And the fact that it is one of his earliest cards is also desirable. Even in low grade condition, it’s hard to find it under $200.