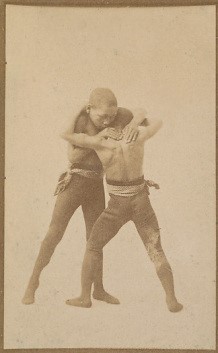 These cards are similar to other 19th Century tobacco cards in their appearance. The subjects feature African Americans in various activities. The series is cataloged as N157 in the American Card Catalog. Cards are virtually identical to the N682/N692 set, only with a different sponsor.

While the cards are mostly a non-sports series, a handful of sports cards can be found in it. One card features two boys wrestling and a few picture boys in boxing scenes. The subjects are unnamed.

The cards were issued by the American Tobacco Company and, as a result, the same cards/pictures are found with several different tobacco brand names on them as that company was a conglomerate of several firms. Tobacco brands represented on the cards are:

As stated earlier, cards are similar to the N682/N692 issue. The pictures are the same but those have the Old Fashion Fine Cut name at the bottom. Should you encounter a card with that name with one of these pictures, it belongs to that series.

Also of note is that even within those brands, there may be additional variations. The Honest Long Cut cards, for example, have been seen in more than one font type.

One interesting thing is that a few of the cards have very slight pose variations. This, of course, is nothing new to 19th Century cards. As I’ve covered with the N48 and N508 women’s baseball series’, that was something seen quite heavily in those sets.

Pictures of the cards can be seen here.