This unique set was produced in Germany and included two series’. The set mostly includes actors and actresses. However, Series 1 included many athletes, including tennis players, swimmers, and aviators. Others are also found in the set such as photographer and news correspondent Ilse Steinhoff, who photographed the Olympic Games. The set was released by the Garbaty Cigarette company.

Unlike other tobacco card sets, these cards had more of a square shape than a rectangular one, making them similar to the 1930s gum cards. In addition to an embossed design, cards had a matte back but a light gloss on the front.

Beyond this set, Garbaty produced other similar sets in the 1930s. This site has a great breakdown of the series and these are the known sets:

The cards are most distinctive by their wide assortment of borders. Looking at the cards, you’d hardly believe they were part of the same set with numerous border designs. But the backs had uniform advertisement designs. They are often said to be among the most beautiful tobacco cards issued.

Athletes are mostly found only in the Modern Schonheitsgalerie Series 1 set believed to have been issued in 1934. Among tennis players in the set are Hall of Famers Helen Wills-Moody and Peggy Scriven. Olympic diving gold medalist Georgia Coleman is also in the set. Additionally, noted ice skater Sonja Heine is in the set and may even be the most popular name.

Other sports represented include track and field and archery. Many of the athletes’ names are not high-profile ones. But several of them were among the best in their sport and won Olympic medals.

Additionally, some of the athletes also starred in films. One of the athletes with a most interesting story is American swimmer Eleanor Holm. She was a gold medalist in the 1932 Olympics but, on the trip to Germany for the 1936 games, she was said to be intoxicated (a claim she denied) and was not allowed to participate, despite being a favorite to win. She later appeared in a movie and was inducted into the International Swimming Hall of Fame.

While many of the athletes were German, some were not. And from sort of a sports vantage point, several cards of actress Anny Ondra, wife of boxing legend Max Schmeling are also in the set.

Here’s a closer look at the athletes in the set. 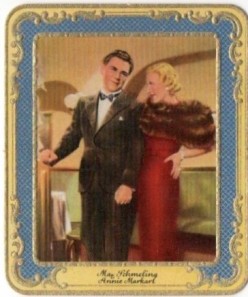 While most of the athletes are in that Series 1, Series 2 has one big name in German boxer Max Schmeling.

Schmeling seems like an odd fit for a set titled, Modern Beauty. But he actually fits in as he was wildly popular in German culture and appeared in numerous tobacco sets. Schmeling was essentially the Babe Ruth of Germany, particularly with the popularity of boxing at the time. Even beyond that, he lived a high-profile life, and was married to actress Anny Ondra, which further drove tobacco companies to include him, even in non-sports sets.

He is pictured on this card (No. 269) in plain clothes with an actress named Annie Markart.

A checklist for this set has not yet been developed. However, I have checklisted what I believe to be the athletes in this set. These appear to start with Card No. 207. After a break, the athletes pick up at or around No. 263 before ending at No. 269.