This interesting set showcased the various activities of boy scouts. It is similar to other series’, such as the 1910 Reed Boy Scouts set (T45) but is significantly larger. It is also similar to a later Ogden’s set issued in 1929, although that set does not include any sports cards.

This set was produced over the span of four years. A total of five different series were printed for a total of 225 cards. In all, though, more cards than that actually exist because the first three series’ (each with 50 cards) included cards printed in both blue ink and green ink. Adding those cards to a master set gives us a total of 375 cards.

The five series’ are as such:

Finally, it is worth noting that at least one pair of error cards exists. In the first blue series, cards titled, “A Case for the Ambulance” and “Transporting a Wounded Comrade” can be found with two backs. Card No. 39 is A Case for the Ambulance while Card No. 40 is Transporting a Wounded Comrade. But both cards can be found with the back/description for the other, thus creating two No. 39 and two No. 40 variations. It is unclear which of these cards are the rarer of the two. 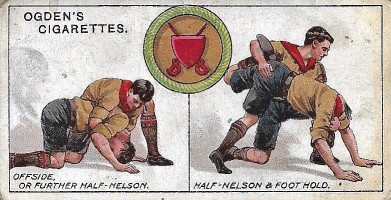 Most of the cards in this set are non-sports issues. However, a few sports cards are found that are collected.

Cards numbered 180 and 181 from the fourth series feature wrestling. Card No. 181, shown here, features two pictures, both showing a half-nelson wrestling hold. Card No. 180 also features a pair of holds. Additionally, cards numbered 178 and 179 both depict boxing with a similar layout showing a pair of punches one one card and some stances/defensive positions on another.

Collectors looking for wrestling cards should be careful when selecting one. A pair of cards featuring the similar but different sport of Ju-Jitsu also appear in the set (No. 182 and 183). Those cards feature wrestling-like images so they can be confusing. As all of these cards are found in the fourth series, they can all be dated to 1913.

Backs of the cards provide some instruction on what is depicted on the front.

Other sports are sprinkled in elsewhere. Cards in the fifth series (dated to 1914) cover soccer and cricket loosely. The soccer card explains the offsides rule while the cricket card is a depiction of how to umpire in that sport.

Known sports cards are listed below.