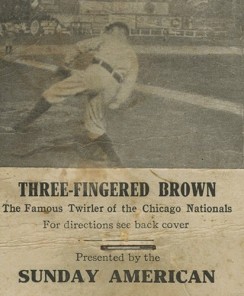 Brown was famously known for having only three full fingers on one of his hands. He lost parts of his other two fingers from a farming accident. Despite the nickname, Brown really had closer to four fingers with one heavily damaged.

The flip book was issued by the Boston Sunday American. The newspaper issued other baseball collectibles, too, including the 1936 Sports Stamps.

The book is printed in black and white, and actually calls the pitcher, ‘Three Fingered Brown.’ It pictures Brown on the front, calling him ‘the famous twirler of the Chicago Nationals,’ and includes the Sunday American name. The back provides simple instructions for the book as collectors were to hold it as shown, letting the pages flip forward at the ‘right speed.’

The book, like other flip books, included images of Brown inside. When the book was flipped, an action shot/short movie would be displayed.

It is quite rare and usually commands high values. Even in low-grade condition, it still starts around $250-$350. Its rarity can probably be explained in its likelihood of being offered in only a single edition of the paper. The back of the flip book makes mention of a different collectible being issued the following weekend. If it was issued in only a single issue of a regional publication, that would certainly explain why it is so difficult to find.