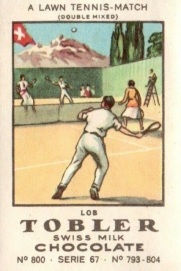 This stamp set was issued by Tobler Chocolates (Tobler Chokolado), a Swiss chocolate company. The exact date of issue is unknown.

Unlike other Tobler series’, this is not a multi-sport issue. Instead, this set features only tennis with various plays from a mixed doubles match. The players are not identified, but each stamp depicts a certain type of shot. Putting them altogether, one could conceivably envision a live point being played out.

The perforated stamps include the Tobler name and promote the company’s Swiss milk chocolate. They are noted as Series 67 in Tobler’s massive issue and the stamp numbers run from the late 700s into the early 800s. And sticking with the company’s roots, a Swiss flag is flying in the background on the pictures featured on the stamps.

Like many of the other Tobler stamps, these were printed in full sheets. They are clearly part of a larger series as card numbering starts in the late 700s.

Note that while I have not seen a complete set from this issue, most Tobler sets included a total of 12 stamps. I suspect 12 exist in this set but cannot say for sure.

Stamps from the set that I have seen include: