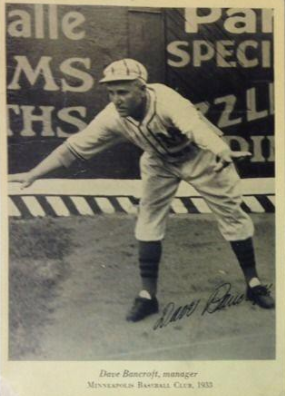 Wheaties is most famous for their panels that featured various athletes on the company’s cereal boxes. But they also produced numerous other sets and were involved particularly in minor league baseball, serving as a sponsor for various teams in different markets across the country.

Some of Wheaties’ most familiar minor league issues were their Radio Appreciation Day/Night team photographs. But they also produced a set of team postcards featuring players on the 1933 Minneapolis Millers team.

The postcards are black and white and include the player’s name and team along the bottom border. The backs included a picture of a Wheaties box as well as a special message from Wheaties wishing success to the Millers and their President, Mike Kelly. The two keys to the set are Hall of Famer Dave Bancroft and former major leaguer Joe Hauser, who was also a legendary minor league home run hitter.

Of note is that a purple ‘VOID’ stamp is found on many of the postcards. The reason for that is unknown.

In addition to the Millers, a set was also seemingly produced for the Seattle Indians, though that set is so rare that it may have never even been released to the public.