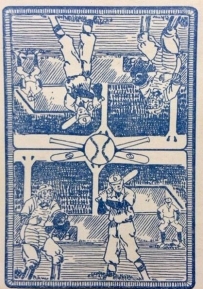 The 1923 Knickerbocker Baseball Game, like others in the era, was a way for players simulate a baseball game.

This game was the creation of a former baseball player, pitcher Jake Aydelott. Aydelott pitched for the Indianapolis Hoosiers in 1884 and the Philadelphia Athletics in 1886. He was only moderately successful with a 5-9 career record and a 4.79 ERA. Aydelott was one of several former players to create similar games that used baseball cards. Others included Tim Jordan and also Walter Maills, to name a few.

The game included 127 cards in the deck. Players would simulate baseball actions and plays through the actions printed on the cards. The product was the work of the Reinig Game Company, which was based in Kalamazoo, Michigan. Printing was done by the B&B Job Printing Company, also in Kalamazoo.

The cards are standard playing cards with rounded corners. Fronts of the cards had simple game actions printed (i.e. Strike, Ball, etc.) with all printing was in black ink. Backs of the cards had a cartoon baseball scene with a batter and catcher. While the game actions were printed in black ink, the baseball scene was done in blue. In addition to the cards, a folded miniature baseball field was included to help players keep track of baserunners.

Because the cards don’t feature specific players, value for these cards tends to be relatively low. However, the cards are still desired by pre-war collectors.

In addition to the game cards, an instructions card was included, which explained game play. Players were divided into two teams with the team playing the field first instructed to shuffle the cards.

The team batting would then draw cards to simulate play until three outs were made. Cards were to be reshuffled at the beginning of each half inning.

In addition, the game’s instructions went as far as to say that a record should be kept of runs, hits, putouts, errors, and assists, to determine the fielding and batting average team and individual players. While that, of course, was determined purely by chance, it still made the game a little more realistic.

As the cards have only printed game actions on them and are without pictures, a checklist is not provided here.