Only ten of the 50 cards feature baseball players but there are many big names including the likes of Babe Ruth, Cleveland Alexander, Ty Cobb, Rogers Hornsby, and Tris Speaker, among others. Other notable names include boxer Jack Dempsey, golfer Walter Hagen, and tennis star Bill Tilden.

Cards numbered 1-10 are baseball players. Cards 11-30 are actors and actresses. Cards 31-50 are other assorted athletes.

Most of the actors and actresses, while famous in the 1920s, don’t move the needle much with collectors today. A few exceptions are Charlie Chaplin and western star Tom Mix, who command a little more than the commons. One interesting note is surrounding the card of Harold Lloyd. Lloyd appeared in a movie with Ruth called ‘Speedy’ and a few trading cards showing the pair in that film are known. Because of that, Lloyd is sometimes lightly desired by baseball card collectors.

It is also notable that this is really the first of two parts of a complete set. The set was continued with the 50-card W513 series. In all, 100 total cards are in the set. While the two sets are similar, they also have several key differences, as outlined here. 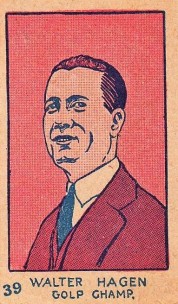 The years are largely debated because of the number of variations found in the set. Some variations, such as Gene Tunney’s No. 44, reflected weight classifications (one variation lists him as a heavyweight and another, a light heavyweight). Others, such as tennis player Helen Wills Moody, reflected champions losing their championships (she is called a champion on one and an ex-champion on another). The set is a hodgepodge of sorts.

An easy trick to help somewhat date the cards is found in the fonts. The first cards were printed with a sans serif font, as shown in the Bancroft card here. Later ones with changes were a typewriter style of font, usually to indicate team changes or status changes (i.e. Ex-Manager, which is found on a few of the baseball cards).

The two players with those changes using the ‘Ex-‘ designation were Ty Cobb and Tris Speaker. As I wrote for Sports Collectors Daily, that was likely because a gambling conspiracy left their status in doubt after they left their respective teams following the 1926 season. It is likely that their cards were printed before they joined their new teams after they were cleared of the allegations.

Some typos also exist. Walter Hagen is listed as the ‘Golp Champ’ and baseball player Glenn Wright is listed as ‘Glen.’ And on Speaker’s non-Ex. Mgr. card, Cleveland was spelled ‘Cleavland.’ The later Ex. Mgr. card had the correct spelling.

Finally, I also discovered an error card for boxer Abe Goldstein in recent years. His card can be found without a card number, as can the card of actor Jackie Coogan.

You can read a more in-depth article I did on the variations here.

In terms of rarity, the subsequent W513 strip cards are tougher than these W512 cards. That almost certainly stems from the fact that the W512 set was produced over three years (1925-27) while W513 was available for only one year.

The rarity also makes completing W513 a little tougher. The W512 set may seem the more difficult of the two to complete with Ty Cobb and Babe Ruth a part of it. From a financial standpoint, that is perhaps true. But the W513 set includes 2 1/2 times as many baseball players as W512 and they are not always easy to find.

PSA’s population report helps show the rarity a little clearer. Despite the fact that there are only ten baseball cards in W512, PSA has graded approximately 750 cards. On average, that comes out to 75 a player, although the numbers are widely skewed because of the rush to grade Cobb and Ruth cards. W513s? PSA has graded only about 500 for the 25 baseball cards – an average of about 20 per player.

Those numbers may be a little biased since there are more big name cards worth grading in the W512 set. Still, the fact that there are nearly four times as many per card (on average) is alarming. Plus, eBay is a pretty good sniff test, too. You generally see about three times as many W512 baseball cards available for sale as you do W513s.

The checklist below includes all known variations.