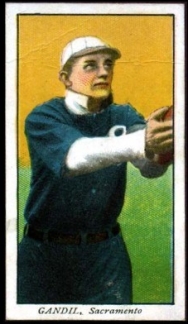 The T212 Obak cards make up three different minor league sets. The three issues span three years as they were printed in 1909, 1910 (two sets), and 1911. While it’s a great series, there are several reasons why it’s extremely tough to complete.

Featuring a total of 426 cards in the set, this is one of the larger tobacco card sets ever printed. It is difficult to complete not only because of its size but because of the rarity of many of the cards.

Fronts feature color photographs with player names and teams. Backs are different for all three series’ and printed in either blue or red ink.

The 1909 set includes 76 cards and features the Obak logo on the back in calligraphic-style font. 1910 features cards with different backs. One says there are 150 cards in the set while another says 175. Players with the ‘150 subjects’ back are also found with the ‘175 subjects’ back. Finally, the 1911 set includes yet another back with red ink.

Because the 1910 sets have backs that advertise both 150 cards and 175 cards, some may classify those as two different issues. I have not, however, because the card fronts used for each of those backs are the same regardless of the back.

In addition to the Weaver and Gandil cards, the set is also known for one card of an obscure minor leaguer famously named Ten Million (yes, that was his real name). Ten Million never made it to the major leagues but his card still sells for a few hundred dollars, even in low-grade condition.

Million got his legendary name reportedly from either his mother or grandmother.

Million’s career didn’t last too long. He debuted in 1911 with the Victoria Bees, the team featured on his T212 Obak card, at the age of 21. He nearly made it to the major leagues in 1912 but an injury sidelined him and he stayed in the minors that season with Tacoma and Sioux City. In 2013, he played for Tacoma and Spokane and 2014 saw him play for Tacoma and also for Moose Jaw in the Western Canada League. Knee problems ended his career.

The T212 Obak cards have three main types of backs – one different one for each year they were issued.

1909 cards have a blue calligraphic back. They reference the Pacific Coast League and are the only one of the three to do that. The other Obak cards also included players from the Northwestern League. Despite a somewhat quirky border on the backs of some, these are often a favorite with collectors because of the Obak name. Some of these backs are also found without the border.

1910 card backs also were printed using blue ink. However, as we’ll see in a bit, while they are mostly they same they also are found with numerous slogans.

Finally, 1911 cards have a red back. These are distinctive because of the ink color and present the Obak name in a third font type. The 1911 backs are also different because they actually tell you about the player pictured, providing a biography and some statistics.

Shown here are the three different types of backs.

In addition, the 1910 backs have numerous different styles. The design is generally the same but the 1910 cards have a bunch of different slogans printed on them. They are mostly the same other than that. However, more than 20 different types are known.

The sets that comprise the T212 Obak complete series are listed below.