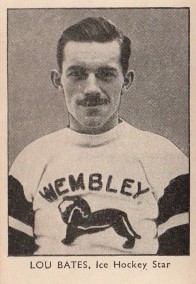 This unique set includes athletes in a variety of sports. The concept is a bit different from other sets.

The set includes a set of eight booklets of cards. The cards, in original form, are all attached in a long strip and when each book is opened, the cards fall out like a plastic photograph holder in a wallet. Each booklet includes a total of six cards.

Many of the names are minor ones as the set includes some less popular U.S. sports such as soccer, auto racing, and aviation. But several popular sports are represented by cards including football, boxing, tennis, and hockey. The series does include some big names, such as boxing legends Joe Louis and Max Schmeling, and tennis Hall of Famer Fred Perry. Additionally, another key card is a boxing card featuring the Hall of Fame trio of Jack Dempsey, Max Baer, and Primo Carnera. That card, interestingly, is in a booklet for movies and not the booklet featuring boxers. The lone hockey subject is Lou Bates, a star player for the Wembley team in the UK. 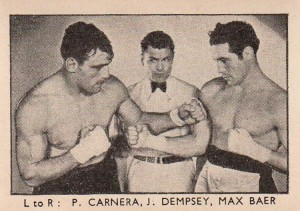 The cards are black and white with a basic look and the athlete’s name at the bottom of each card. Backs are blank. The cards are very fragile. They are printed on a paper stock with a matte finish and are incredibly easy to damage. The covers that they come in have helped protect some of them but even the covers are only a standard construction paper stock.

The booklets are themed by sport, though two (Sporting Film Favourites and Sporting Marvels) include subjects from various sports. The Film Favourites booklet depicts actors playing athletes in movies. The lone exception is the aforementioned card featuring Dempsey, Baer, and Carnera. Those were real fighters and they appeared in a movie called, “The Prizefighter and the Lady.” Another interesting card in the Film Favourites set is that of actor Joel McCrea, who is pictured as a football player in the 1932 film, “The Sport Parade.”

Each booklet has a blue or white color and includes a cartoon depiction of the sport featured. The booklets then fit into holders inside of a large orange book dubbed “The Champion Sports Wallet.”

The eight individual booklets of cards include:

All of the booklets are quite rare. Because they were created with only basic construction paper, they are even harder to find in good condition.

These cards are commonly dated incorrectly. They have been advertised as being from many different years in the 1930s, though that is incorrect. Many have simply taken to dating them as a 1930s set because the date is not usually known.

However, the back of the large orange collector booklet that holds the smaller booklets makes it clear this is a 1936 issue. That orange booklet was offered by The Champion in their October 17 publication from 1936. The other booklets were subsequently offered with a new one being distributed each week.

A variation of the booklets actually have a small print date on the back cover, indicating what week they were specifically issued. 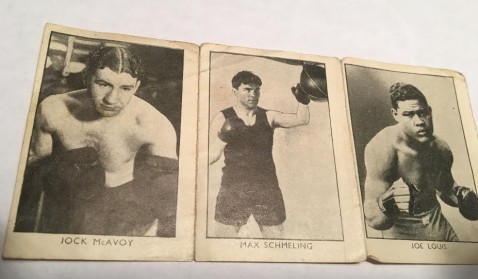 That dating issue has been particularly troublesome for boxing collectors.

The booklet containing cards of boxers includes the legendary Joe Louis. Louis’ card is often referred to as a rookie along with a few other issues from 1935. But as these booklets were issued the year after, they should not be considered rookie cards.

Part of the confusion certainly lies in the fact that The Champion did in fact issue cards from 1935 featuring other boxers. However, this particular card featuring Louis was not issued until 1936.

SGC has even dated at least some of these cards as being from 1930. That is spectacularly incorrect as Louis’ first recorded fights were not even until 1934. In 1930, Louis would have been only 16 years old.

Super-Men of the Skyways (Aviators)

Wizards of the Football Field (Soccer)