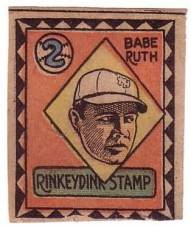 While an intriguing issue, many may question the legitimacy of the 1927 Rinkeydink set as an actual collectible.

The Rinkeydinks are certainly not cards and not even stamps. These, like the Sport Stamps series that appeared in newspapers across the country, are simple cutouts from a newspaper. As only newspaper cutouts from a comic section, it’s understandable that few copies of these have survived. PSA has graded only about 20 to date.

Part of the reason for the classification as a stamp is that “Rinkeydink Stamps” is printed at the bottoms. Above it is a small cartoon picture of the player as well as their name.

All stamps have the number ‘2’ printed on them inside of a baseball. Some of the backs make reference to the ‘2nd Comic Section’ so that number is likely tied to that reference.

PSA has identified ten of these in the entire set. While only cutouts, the set has gained some measure of popularity. Part of that is because the checklist is full of Hall of Famers stars despite being a very small issue in terms of the checklist. In fact, the set includes only Hall of Famers.

See below for the complete known set checklist.