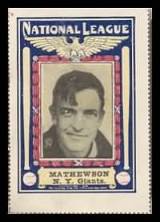 The 1914 New York Pritchard Stamps set represents only players from the New York Giants and New York Yankees. For that reason, it makes sense that the regional issue was printed by the Pritchard Publishing Company based in New York.

The stamps included black and white images of players printed inside a colorful, baseball-themed decorative border.

Because the set includes only New York players, the checklist is somewhat limited. But the set is anchored by Hall of Famer Christy Mathewson and includes some other key players of the era.

In addition to this set, a similar set by Pritchard Stamps was printed for the Yale baseball team.