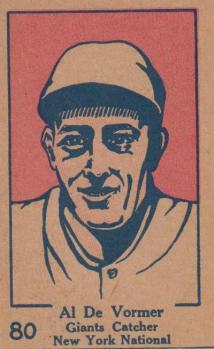 The W513 strip card set includes various athletes including baseball players, boxers, and more. Cards feature colored images with player names, teams, and card numbers in the bottom border. Backs are blank. About half of the set is comprised of baseball players.

While the set is mostly baseball players, boxers, and non-sports personalities, one interesting card is No. 100. That card features French tennis player Rene Lacoste, who won seven grand slam titles. Lacoste is known by most outside of the sporting world for creating the Lacoste branded clothing.

This is the second series of the W512 set and also includes 50 cards. Because of that, card numbering began for the W513 set at No. 51. It also explains why many of baseball’s big names were absent here. Many had already been included in the W512 issue.

Regarding baseball, it has a much bigger presence in this set. The W512 set had only ten baseball players but there are 26 in this W513 issue. Cards 51-60 are aviators, cards 61-86 are baseball players, and cards 87-99 are boxers. No. 100 is the aforementioned Lacoste card, which is somewhat of an anomaly as the only other type of athlete represented.

While the two sets are similar, they also have several key differences, as outlined here.

In terms of rarity, W513 strip cards are tougher than the W512 cards. That almost certainly stems from the fact that the W512 set was produced over three years (1925-27) while W513 was available for only one year.

The rarity also makes completing W513 a little tougher. The W512 set may seem the more difficult of the two to complete with Ty Cobb and Babe Ruth a part of it. From a financial standpoint, that is perhaps true. But the W513 set includes 2 1/2 times as many baseball players as W512 and they are not always easy to find.

PSA’s population report helps show the rarity a little clearer. Despite the fact that there are only ten baseball cards in W512, PSA has graded approximately 750 cards. On average, that comes out to 75 a player, although the numbers are widely skewed because of the rush to grade Cobb and Ruth cards. W513s? PSA has graded only about 500 for the 25 baseball cards – an average of about 20 per player.

Those numbers may be a little biased since there are more big name cards worth grading in the W512 set. Still, the fact that there are nearly four times as many per card (on average) is alarming. Plus, eBay is a pretty good sniff test, too. You generally see about three times as many W512 baseball cards available for sale as you do W513s.