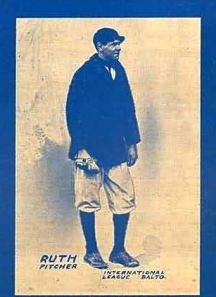 The 1914 Baltimore News set has gained notoriety for its Babe Ruth card, which is identified as the rookie of the famous slugger by many collectors.

They are distinctive for their thick red or blue borders. They are also a bit larger than many pre-war cards. Measuring a little larger than 2 1/2″ by 3 1/2″, they have the size of a modern-day trading card. Cards were printed in either a blue or red ink tint color with the backs including a schedule. The set was actually part of a game, per PSA.

Those backs, by the way, have led some collectors to wonder if these are true baseball cards and not schedules instead. However, most generally consider these to be cards since they feature different individual players.

The headliner in the set is clearly the card of the legendary Babe Ruth. While it is consistently billed as Ruth’s earliest baseball card, not all agree that this is necessarily his rookie edition.

A rookie card is often classified as a player’s first non-regional edition and while many early cards were regional to some degree, Ruth’s 1914 Baltimore News is particularly a regional issue. The card also features Ruth as an International League minor league player and some collectors believe that only major league issues should serve as a true rookie.

Whatever the case, though, this has become Ruth’s most valuable card. The cards sell consistently for six figures and ones not in low-grade condition are generally considered to be seven-figure cards. Grasping a good feel on their pricing, however, can be difficult because they are hardly ever offered for sale. They are incredibly scarce with only about ten or fewer known to date, according to PSA.

The cards are so rare that the known checklist has grown over the years.

Most recently, a 17th card made its way into the checklist — a card for former player Dave Danforth. Danforth’s card was only brought to light in 2020 and was in the possession of his family and passed down. The card was heavily desired and sold for $7,500 by Heritage, despite its low-grade appearance as an SGC 1.

The cards are rare enough that it is quite possible additional ones are discovered in the future.

As it stands now, 17 cards in all exist in the set. That, however, is likely not complete. For example, a Terrapins team card is not known but would be likely to exist as the Orioles one does.