With a limited supply, gauging the pricing of one of the most valuable baseball cards isn’t easy

The 1914 Baltimore News cards are generally cited as the first ones of the legendary Babe Ruth. Since the set has both blue ink and red ink variations, Ruth technically has two cards in the set.

As a 19-year-old, Ruth spent parts of 1914 with both Baltimore and Providence while playing a handful of games in the majors with Boston. He landed in this set, which was distributed by the Baltimore News and included cards for the two Baltimore teams, the Orioles and the Terrapins, a squad from the short-lived Federal League. Backs of the cards included schedules for those respective teams, sort of skewing the definition of ‘baseball card.’

While the cards may be Ruth’s first ones, they are not always referred to as his true rookie cards since he was only a minor league player at the time with the Baltimore Orioles of the International League. Still, as you can well imagine, these cards are among the most expensive ones in the hobby and fetch six figures even when they are in low-grade condition. 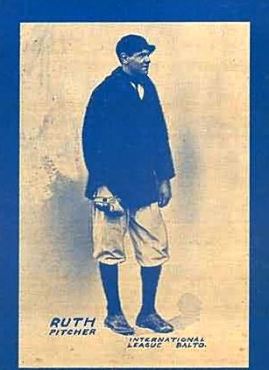 But exactly how valuable they are is difficult to say. The reason for that is that they are hardly available for sale.

The last known one for sale I’ve seen is a PSA 1 offered in 2014 by Goldin. The final price is not listed on their website and there is no record of it in PSA’s past auction sales. However, a Forbes article indicated the card sold for $390,000. And while most pre-war cards have gone up over time, that price was significantly less than the $450,300 it sold for the year before.

Beyond that, recent sales are slim pickings. The same card referenced above sold twice last decade, netting about $150,000 each time.

A PSA 4 is out there but trying to determine that value is nearly impossible. According to PSA, that card sold for $243,600 but that was about 15 years ago, way back in 2005.

What are the cards worth today? That’s the million dollar question. Ruth cards have shot up in value lately and I expect those cards would be more the last time they sold. That’s particularly true for the PSA 4 example since it’s in such great shape and hasn’t been offered for so long. But in terms of trying to determine accurate pricing, that’s difficult to do since they are sold so infrequently and because there, to my knowledge, haven’t been recent public sales.