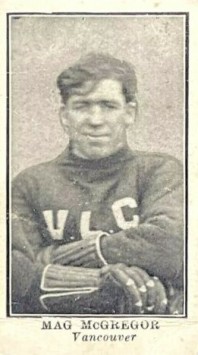 When it comes to vintage and pre-war lacrosse cards, the C59, C60, and C61 sets distributed in Canada are king.

The C61 set is the third of Imperial’s three lacrosse sets, believed to have been issued in 1912. The cards feature black and white images of famous lacrosse players on the front. The layout of the cards is similar to tobacco cards for other sports with a simple white border and the subject’s name and team at the bottom. These have a decidedly different look from the color lithographic C59 and C60 sets.

Backs of the cards have the title “Lacrosse Series” at the top with a pair of crossed lacrosse sticks at the bottom. The middle of the card includes the player’s name and brief career history. Unlike C59 and C60, these cards include that history in both English and French. Another change from those issues is that these C61 cards have the card number on the back as opposed to the front.

The biggest difference between this set and C59/C60 aside from appearance, however, is that this set was heavily shortened, virtually cut in half with only 50 total cards.

Most of the names will not be familiar to sports card collectors these days. However, the set is known for producing early cards of hockey stars that also played the sport of lacrosse. The most notable of these, arguably, was Hockey Hall of Famer Edouard “Newsy” Lalonde. Famous boxer Tommy Burns, the only Canadian-born World Heavyweight champion, did not appear in this set as he did in the earlier C59 and C60 releases.

The cards are quite rare, though that has not yet translated into a value commensurate with that. Low-grade cards in the set typically start in the $15-$25 range. But the cards are undeniably rare and were produced in much fewer quantities than the baseball issues that were issued in the U.S.