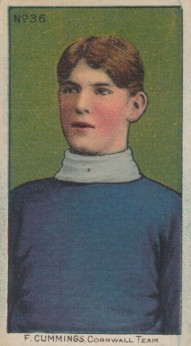 When it comes to vintage and pre-war lacrosse cards, the C59, C60, and C61 sets distributed in Canada are king.

As stated on this lacrosse page, the C59 checklist is virtually identical to the C60 checklist. C59, however, has two additional cards, No. 99 and No. 100.

The release date of these cards seems to vary depending on the source. Some cite the C59 set as a 1910 issue while others say 1911. Some references even say 1909. The cards feature color lithographic images of famous lacrosse players on the front. The layout of the cards is similar to tobacco cards for other sports with a simple white border and the subject’s name and team at the bottom. A somewhat unique aspect is that a card number appears at the top.

Backs of the cards have the title “Lacrosse Series” at the top and the “Leading Players in the Canadian National Game” at the bottom, which is where Jefferson Burdick drew his reference to that name for the American Card Catalog. The middle of the card includes a shield with a lacrosse design, along with the player’s name and brief career history.

The backs of the cards are extremely important to differentiating them from the C60 Imperial cards. While these cards include a shield and more elaborate design, the C60 cards have a more basic design with a pair of lacrosse sticks at the top and no mention to the Leading Players title.

Most of the names will not be familiar to sports card collectors these days. However, the set is known for producing early cards of hockey stars that also played the sport of lacrosse. The most notable of these, arguably, was Hockey Hall of Famer Edouard “Newsy” Lalonde. Some players have two cards in the set and Lalonde is one of those, making this release extra difficult to assemble. Another notable name is Boxing Hall of Famer Tommy Burns, who appears in the set. Burns is the only Canadian-born World Heavyweight champion and, like Lalonde, played a bit of lacrosse. Other Hockey Hall of Famers in the set include the likes of Paddy Moran, Joseph Malone, and Bouse Hutton.

The cards are quite rare, though that has not yet translated into a value commensurate with that. Low-grade cards in the set typically start in the $15-$25 range. But the cards are undeniably rare and were produced in much fewer quantities than the baseball issues that were issued in the U.S.

One interesting aspect that I’ve observed is that a good number of these cards seem to have hand cut edges. The reason for these cuts is not clear but they do appear at a disproportionately high rate compared to other tobacco issue, leading us to possibly wonder if a large amount were hand cut in factories as opposed to these cuts being the product of individual collectors.

Additionally, production issues included many cards that were cut off-center. Seeing cards badly off center in this set is quite common.