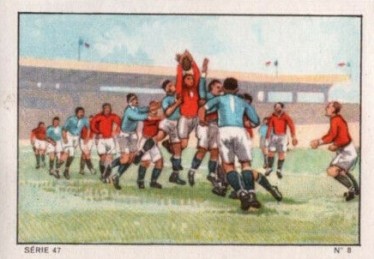 These stamps were not postage stamps. Instead, they were meant to be pasted into a collectible album.

Fronts included color images of rugby players in a variety of poses — some action, some portraits. The stamps had white borders. They are part of Series 47 in Nestle’s 1937 set. Fronts include that series number as well as an individual stamp number.

While they are typically referred to as a Nestle issue, several other candy companies are listed on the back along with their name, including Gala Peter, Cailler, and Kohler. Backs listed that Series 47 number and are printed in French, also referring to the collectible album.

It is important to note that many of these stamps have been pasted into an album an then subsequently removed. In those cases, the backs can be completely or partially illegible. Backs include the name of the player or scene pictured on the front.