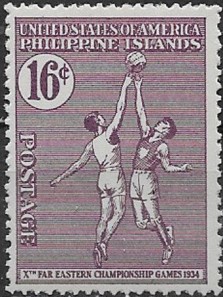 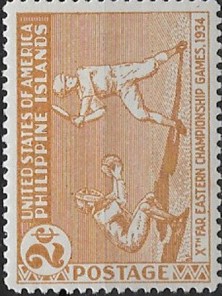 This stamp set commemorated the tenth Far Eastern Championship Games held in 1934. The event was held in the Philippines, which produced this issue. A total of four nations (China, Dutch East Indies, Japan, and host Philippines) participated in a total of eight different sports.

Three of the sports were commemorated in this stamp set, including baseball and basketball. To most collectors, the third, tennis, is less desirable than the first two. The stamps included single-color images of the three sports.

Because the stamps were actual postage stamps, they carried specific denominations. They are often found canceled/used and those have less value than unused stamps.

Interestingly, while this is considered an international issue today, that wasn’t always technically the case because the Philippines were a U.S. territory until 1946 when they were granted full independence.

The games were the last ones held before they would be reborn as the Asian Games in 1951. Games were scheduled for 1938 but were cancelled as Japan invaded China to begin the Second Sino-Japanese War.