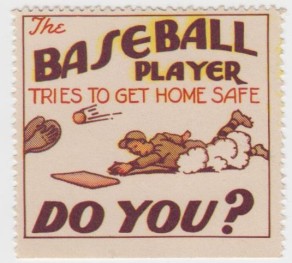 These unique and rare stamps were issued to promote safety in driving. I was unable to find information on this issue until recently stumbling upon an old newspaper advertisement, dating them first to 1940 in The Evening Review in East Liverpool, Ohio. That would put it out of the pre-war era for this site. However, after digging some more, I have now been able to date these stamps as a 1938 issue at the latest. Here is a more in-depth article I wrote regarding the series.

A 1938 issue of The Eagle based in Bryan, Texas advertised these stamps from the Texas League of Safety. The stamps were actually seals, which were designed to be placed as add-ons to packages. These were not postage stamps. Rather, they were more of a decorative item to add to envelopes or packages, to seal the backs of envelopes, etc.

The set was mostly a non-sports issue and 30 stamps are included in the set. The featured pictures of various people and situations with slogans related to safety. Of interest here is a baseball stamp, which shows a runner sliding. The stamp, like the others in the set, is safety-related. It reads, “The baseball player tries to get home safe, do you?” The runner is pictured trying to beat a throw home to the catcher.

Some of the slogans have been borrowed elsewhere. For example, one stamp in the series reads, “Don’t Kid Safety, you may be the Goat.” That phrase, however, was used in other safety bulletins I have seen, such as one in this publication from 1915. I have seen other similar examples of the slogans used in this set appearing elsewhere.

Printed in sheets, the baseball stamp appears to have been printed somewhere in the middle at the bottom border. That is evident because three of its sides have a regular postage stamp-style cut while the bottom has a flat edge.

It should be noted that, while I have designated the Texas League of Safety as the original distributor of these, it is possible (even likely) they could have been produced earlier and/or distributed elsewhere earlier. That is evident because the seals reappeared in 1940 for sale by a VFW Post in East Liverpool, Ohio. Several groups apparently distributed these sets and while the Texas League of Safety is the earliest reference I know of for these stamps, earlier entities may have had them, too.

The stamps in this set are exceedingly rare. For that reason, a full checklist is not known. However, I have identified the stamps I know of to date: