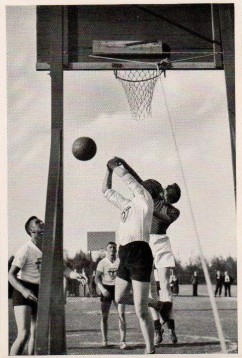 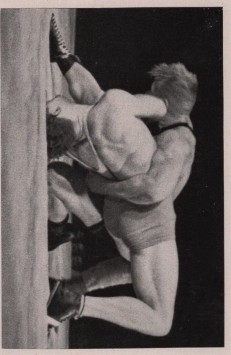 Founded in the early 1900s, Germany-based Reemtsma is one of Europe’s biggest manufacturers of tobacco. In 1932, the company produced a set of 200 cards for the Olympic games and in 1936, they produced another issue.

As this is a German set, the technical name of the issue is Reemtsma Cigarettenfabrik (translated to cigarette factory) Olympia. The Reemtsma name is not actually on the cards themselves. However, they are identified as the distributor of these cards by their presence on their blue collectible albums that were created for collectors to glue their cards into.

The ‘cards’ are more like photos, actually, measuring about 5″ x 7″. Some were printed in full color while others are black and white. And covering the Olympics, obviously, a number of sports are included. Other noteworthy sports in the set include boxing, wrestling, and track and field. Track and field, by far, has the largest presence in the set, making up almost half of it.

The prize here (in addition to the cards of track and field star Jesse Owens) for sports collectors are the several hockey and basketball cards. The basketball cards, in particular, are some of the earliest ones in the sport featuring actual players. These were also possibly the first Olympic basketball cards produced since that sport’s Olympic debut happened in the same year.

Two sets of these cards were produced known as Band I and Band II. Each Band included numerous subgroups and both the Band and ‘Gruppe’ number are printed on the backs.