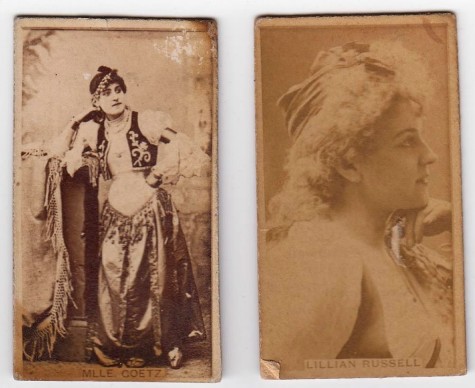 When you think of large 19th century tobacco card sets, the first one that usually comes to mind among collectors of sports cards is the N172 Old Judge set, issued from 1886 through 1890. But there’s another set of cards issued around the same time that deserves a mention — the N245 Sweet Caporal cards.

These cards look a lot like the other cards of the era. They included real sepia photographs that were affixed to small pieces of cardboard to create a makeshift trading card. These particular cards were offered inside of packages of Sweet Caporal cigarettes. While both actors and actresses make up the checklist, actresses dominate the series.

Jefferson Burdick actually offers a bit more context around these cards than he did the much more popular Old Judge baseball cards. And some collectors would be surprised to know that Burdick actually cited these as the “Longest series of cards,” though he does not offer dates of production. He does, however, indicate that there were approximately 2,000 known at the time. Vintage Non-Sports Auctions places the number these days to 2,300-2,400. I’ve seen rumblings online of a checklist existing but have never stumbled upon one.

Many of the actresses names will be unknown to collectors. And, to be fair, the majority of them are all roughly the same value. These cards are quite inexpensive with lower-grade cards selling for about $1-$2. Lillian Russell is arguably the biggest name in the set and her cards can sell for $10-$15 or so. But as a whole, these cards are very inexpensive, especially considering they are fast approaching 150 years old.

Another point is that these cards can be difficult to sort with other sets — particularly if the cards have blank backs or are skinned. Other similar cards were issued around the same time for other cigarette brands and not all are N245 cards. For example, a similar but different series is catalogued as N145, consisting of cards for Duke. 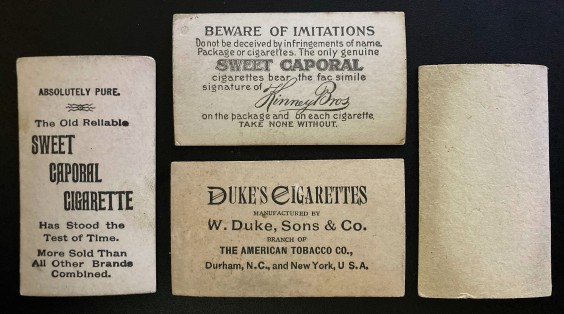 The cards feature an assortment of fronts and backs. Many actresses have numerous cards with differing pose variations. And similar to the Old Judge cards, many of the images on these have faded over time. Cards with clear, dark images are the ones that are the most desirable. Backs, too, vary. Some are blank-backed while others have Sweet Caporal back advertisements.

To date, I’ve seen a few back variations. The most common one is arguably a vertical advertisement with the headline “Absolutely Pure” at the top. “Sweet Caporal Cigarette” is in large font in the middle with the bottom stating that the cigarettes have “Stood the test of time” with “More sold than all other brands combined.” A rarer type of back variant has that advertisement printed upside down.

The rarest of the Sweet Caporal ads appears to be a horizontal variation that bears the headline, “Beware of Imitations.”

In addition to this Sweet Caporal set, as mentioned above, another similar set was issued for Duke Cigarettes. Those, however, are a separate issue with similar fronts to the Sweet Caporal cards. Shown here is the back of a Duke card for comparison.

Here are some of the back variations in my own collection, though my knowledge with this particular series is limited as such that others could very well exist.

So why are the cards so inexpensive? Well, that’s relatively easy to pinpoint and there are three particulars that come to mind.

First, like trade cards issued in the same era, they are quite plentiful. Now, the set checklist is large enough that, similar to the N172 Old Judge cards, finding exact cards can be somewhat challenging. There are so many subjects and so many pose variations that finding some can be akin to finding a needle in a haystack. But, in general, there are a lot of these cards floating around out there. The Lillian Russell cards are often bought and sold, so those can be a bit easier to find. In a nutshell, finding a specific card from this set can be difficult but simply finding an N245 card in general is not hard.

Along those lines, collectors should not be fooled by the population reports on these. For example, PSA has graded only about 300 cards to date. But that is not indicative of the true rarity of these cards. Rather, it’s because high-grade examples are difficult to find and because the cards are simply not very valuable.

Second, this is a non-sports issue. And while some of those can be quite valuable, in general, those cards trail the values of sports cards by quite a bit. Cards of actresses typically are worth a fraction of cards of baseball players and even many other athletes.

Finally, the subjects simply are not well known. In most of these cases, there isn’t great footage of these actresses available. We can’t see them perform or even make great determinations of the most skilled ones. That’s far different from sports. We may have not footage of 19th century baseball players but we at least have their statistics to measure them against others. Simply put, it is difficult to be drawn to particular actresses over others.

Add it all up and you’ve got some of the most affordable early tobacco cards around.