The last time out, I used this column to focus on a really cool baseball trade card from the 19th century. But that card featured a generic subject and I really want to focus on affordable cards that you can find of real players. I love the generic stuff more than most but I also realize that the majority of collectors are seeking cards of actual baseball subjects.

That brings us to this month’s bargain card — Bucky Harris’ 1936 Goudey card. 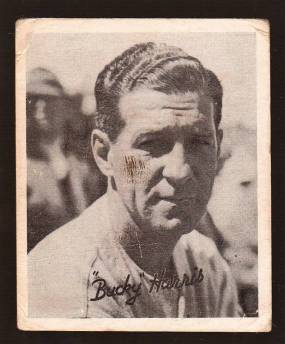 Harris wasn’t only a 12-year major league veteran playing primarily for the Washington Senators, but he is also a Hall of Fame manager. He was a fine player, mind you, collecting nearly 1,300 hits while batting a respectable .274. But it’s his managerial career that got him into the Hall. Harris first led the Washington Senators to a World Series title as a player/manager and then managed the New York Yankees to the 1947 title. All told, Harris won 2,158 games as a manager.

The card is a fairly nice one. It features an up close portrait of Harris with his name in script like others in the set. It should be noted that these weren’t replica autographs — they were merely player names printed in cursive font.

Only the 1941 Goudey set is likely rarer and, well, that’s the cards were issued during a World War. A somewhat rare card of a Hall of Famer seems like a potential recipe for big money. But Harris’ Goudey card is ridiculously cheap, starting at about $15 in low-grade condition.