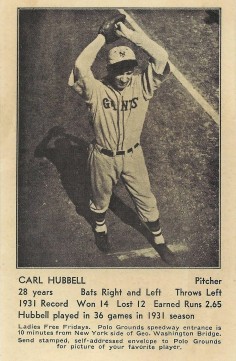 Carl Hubbell is one of those really interesting players that suited up primarily in the 1930s. Hubbell’s career began in the late 1920s and concluded in the early 1940s, but his ‘heyday’ was really the decade in between. There, Hubbell became one of the game’s dominant pitchers.

He won 23 games in 1933, the first of his nine All-Star seasons, and it would begin a five-year run of 20-win seasons. Hubbell led the major leagues in wins that year, while also leading the majors in ERA and shutouts. In the years to follow, he would lead the league in wins, ERA, win percentage, complete games, innings pitched, strikeouts, and even saves — multiple times for some of those categories.

Hubbell wasn’t just a great pitcher — he was seen as one of the best overall players in the game, as evidenced by the fact that he won two Most Valuable Player Awards, finishing third a third time.

One of my favorite Hubbell cards is one that should get more attention — his 1932 Giants schedule postcard.

Unlike other postcards without a copyrighted date, this one is easy to date to 1932. That’s because the back of it contains the home schedule of his New York Giants team. The card was a walking advertisement for the Giants, not only in terms of the schedule of games, but also because it include the address and phone of the box office where tickets could be bought.

The first thing to realize is that this is not a standalone postcard as is commonly thought. Rather, it is part of a set that includes more than 20 players. I have never seen anything definitive about how these cards were distributed but they appear to certainly be team-issued cards, given the schedule and information about the games. Additionally, the fronts make a mention of a free picture of any player being available. It is likely that the free picture touted are these cards themselves. Many collectors are only aware of the Hubbell postcard, but there are indeed others that have been graded, including Mel Ott and more. Hubbell’s postcard is by far the most common but PSA has graded five different players and there are many more in the set. All of the cards aside from Hubbell’s are extremely scarce.

These were created by local printer, Minden Press, Inc., which was based in New York. The front included more team-specific information, advertising free Friday games for women, and directions to Polo Grounds stadium. And in true ‘baseball card’ form, it included Hubbell’s biographical and statistical information from 1931.

The postcards were printed in 1932 but we can even nail down the date a bit further than that. The front of the card includes an action shot of Hubbell, along with the mention that he is 28 years old. Hubbell turned 28 in 1932 but not until June 22 of that year, so they were clearly printed before then. And given that the first game on the schedule was April 12, it is likely they were printed even earlier than that.

Another thing of note is that there are two different types of the postcards for Hubbell (that is not the case for the other players). One is printed on a standard type of postcard stock and a second is on a significantly thinner stock that is considered to be paper-thin. To date, I’ve not seen much evidence that one is rarer than the other.

It’s a really clean looking card of a Hall of Famer but even beyond that, it’s one of Hubbell’s earliest collectibles.

Hubbell broke into the majors in 1928 with a promising 10-6 campaign with the Giants as a 25-year-old. But he had only one known card in his first few seasons — a card in the mysterious 1929-30 R315 Anonymous set. Hubbell’s next known ‘card’ was this 1932 postcard. Even if this was his first card, it may not constitute a rookie card to some collectors. But this is undoubtedly one of the first times Hubbell appeared on a card.

Finally, if you happen to like bargains, you’ll love this card. You’re not typically going to find it ultra cheap but sometimes it can be found starting as little as $30-$40 in lesser condition with nice copies starting around $50. Compare that to more popular Hubbell issues, such as his 1933 Goudey cards (which start around $75-$100 in low-grade condition), and it’s easy to see that this is a bargain.

So why is the card so cheap if it’s one of Hubbell’s earliest cards? Mostly because it’s a postcard. There simply isn’t the demand for those when you compare them to tobacco or gum cards. Still, it’s a legitimate card of Hubbell and, given the age of it, a remarkable bargain, all things considered.