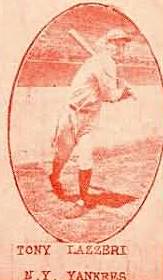 Another story for another time, but the long and short of it is that, four uncut sheets exist — two with black suits of cards and two with red. And some of the cards/suits are duplicated on other sheets, meaning they are not likely part of the same set (at least to me).

Each ‘set’ consists of two 25-card uncut sheets (as stated, two of these are black ink/suits (clubs/spades) and two are red (hearts/diamonds)). And while many of these sheets have been cut down, some remain.

The set with the sports cards is the focal point for most collectors. It includes the likes of baseball Hall of Famers, including Lou Gehrig, Harry Heilmann, Al Simmons, Tony Lazzeri, as well as several boxers. The athletes are really the keys to the set but some of the non-sports cards are popular, too. In addition to a card for film star Charlie Chaplin, there’s a card of a cartoon character named Oswald the Lucky Rabbit. And, surprise — his is one of the more valuable cards in the entire set.

So, who was Oswald the Lucky Rabbit?

Oswald the Lucky Rabbit. Oswald was created by Walt Disney and Ub Iwerks, another cartoonist, and was featured in cartoons in the 1920s and 1930s.

Ironically, Oswald was one of the reasons for the creation of a more famous figure. After Oswald’s rights were claimed by Universal Studios, Iwerks created a competing character for Disney – Mickey Mouse. It isn’t hard to see the comparison between Oswald and Mickey. Both were black and white and had the same kind of face, despite one being a rabbit and another being a mouse.

On the surface, most wouldn’t expect the card to be worth very much. And unknowledgeable sellers will sometimes part with it for a small amount. In decent raw condition, the card starts around $50 — sometimes a bit less. Graded mid-grade cards start around that same price but higher-grade ones can sell for more than $100.

Sure, there are more valuable cards, obviously. But the fact that this card sells for as much or even more than some of the baseball subjects is notable.