October and November were kind of crazy for me in terms of pickups. Not outlandish but — busy. In November, I added several tough E90-1 American Caramel cards to my near set, in addition to a Ty Cobb card, a few dozen boxing strip cards, and rare hockey and golf cards, among other things. In October, I had one of my biggest additions of the year with the rare T210 Old Mill mascot card, a graded PSA 10 game card that was more than 125 years old, and all kinds of other tough cards.

With Christmas in December and some home remodeling stuff, I decidedly took the month off from buying. Not ‘off‘ off but certainly cutting way back. I picked up a decent amount of stuff but nothing real notable — Goudeys, Play Balls, T205s. Most were not all that special or different. Still, I found some things that I think you might enjoy seeing.

My biggest pickup was this 1909 Sarony cabinet card of boxing Hall of Famer James Jeffries. Cabinets are not new to me but I haven’t had a high-profile one, so to speak. But I’ve been buying up more boxing lately and fell in love with this old time picture of Jeffries.

First, it’s just a great image. Second, it was not only already graded, but is a nice mid-grade copy. And third, it’s practically the same pose used in Jeffries’ horizontal action card in the T218 Champions set.

Cabinets aren’t really traditional trading cards. These are generally photographs affixed to some sort of cardboard backing and were used more as display pieces than they were collectible cards. But they are quite popular with collectors and even their oversized nature (this one is about 4 3/8″ wide by 6 5/8″ tall) doesn’t stop them from being heavily targeted. 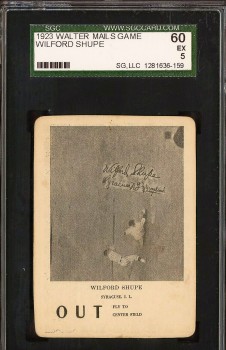 Speaking of graded stuff, I also picked up this 1924 Walter Mails game card of Wilford Shupe that was graded as an SGC 5. Ever since I had some correspondence with the daughter of George Groves, the creator of this set, I’ve wanted to find one in nice condition for my collection. The cards are not aesthetically great looking. But they are part of a very cool vintage game set and not all that common to boot. To date, SGC has graded only a few of each of the cards, including only three of this one.

Why Shupe? Well, I had no particular affinity to him. But as he only played in the minor leagues (this card pictures him with Syracuse, his team in 1923 and 1924), this may be his only card. I have not seen any other cards for him.

I’ve always wanted a nicer copy of a Mails card. The lone one from the set that I had was wildly trimmed and only a common player. This one is much nicer, obviously, and knowing the backstory of how the set was put together, it made it a card I wanted even more.

Another very rare pickup involved a ‘card’ that I’d been trying to get my hands on for some time. 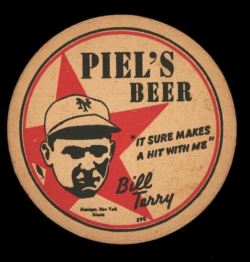 Sometime in the 1930s (or, according to some sources, the 1940s), Piel Beer created a set of coasters of famous people. To date, I have only ever seen three in the set — baseball Hall of Famer Bill Terry, golf Tommy Armour, and singer/actress Ethel Merman. Finding any of them for sale has proven incredibly difficult but Terry, especially, is a tough find. That makes sense, of course, since they are disposable cardboard coasters that were almost entirely discarded.

But I found this one and scooped it up just because I know how difficult it can be to find. I thought I’d found one about a year ago on a site that had one for sale. But upon purchasing it, I was told that it was listed in error and that it was longer available.

These red and black coasters featured the subject along with their name in a script font. I have seen the dates vary on these, though most call them a 1930s set. Terry is shown as the manager of the New York Giants, and he held that title with the club from 1932 through 1941. Thus, these were almost certainly printed between those years. Very nice to finally get my hands on one.

I also had some non-baseball pickups last month. That isn’t a surprise to anyone regularly reading this site since my tastes really cover across all sports. But I rarely get my hands on football and hockey stuff just because there’s a lot less of it than baseball or even things like boxing. 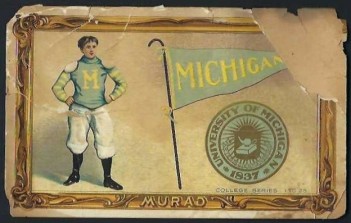 The T51 Murad set is really great and features colleges mixed with generic athletes in all sorts of sports, including baseball, basketball, hockey, and football — along with a lot more. But while that set was widely distributed and had 150 cards in it, the T6 Murad set was a set of larger cards that included only 25 in the set.

These are larger cabinet cards that had a front affixed to a back, which had the set checklist. This one is, of course, in quite bad condition. But you see them so rarely that finding them in any shape is tough. They were only available as part of a redemption offer and not many have survived over the years.

Among the various types of cards I collect are ink blotters. These cards are generally long and narrow and measure somewhere around 6″ to 8″ long. These cards were used for dabbing excess fountain pen ink onto so many of them have ink spots on the front and/or back.

Non-sports blotters are quite common but sports cards are harder to find. Even harder than the baseball ink blotters out there are ones in the sport of hockey. You rarely see any of these and when I saw this one, I knew I had to have it.

The card sort of has an art deco style with only red, green, and black ink used. It was distributed by Barber-Ellis, a company that sold custom envelopes to businesses. This is not a standalone set as other Barber-Ellis ink blotters in the same style have been seen. I have not, however, seen any others from that company that were sports cards. The other ink blotters in the set that I have seen all featured non-sports subjects.

The card, as you can see, has a goalie theme. An oversized goaltender net is behind the goalie and the card declares that the ‘net’ profits are what count.

Very nice item, though, I have not yet been able to determine from exactly when it is from — that is a common problem with ink blotters, though the great majority of them are from the 1920s, 1930s, and 1940s.

Finally, another card I picked up was this 1889 Duke Postage Stamps card.

I’ve written about these cards, calling them a form of early relic card. At the time, card collecting was quite popular — as was stamp collecting. So Duke had the idea to sort of combine the two and create cards with a real postage stamp affixed to them.

The stamps were not common domestic stamps. The great thing was that most were international stamps from other countries. The cards were really a set that focused on mail and how it was distributed in other countries. There’s a great card, for example, of The Pony Express found in it.

But a few non-mail cards were printed that focused on actual card collecting. The other cards in the set aren’t too bad to track down, despite being 19th century tobacco cards. But the pair focusing on card collecting can be pretty difficult to find and are quite popular. I found this one and quickly scooped it up. It still had the stamp affixed to it (many of these cards have the stamps removed) and is actually in great condition.

Pictured on the card are three boys, huddled around, seemingly swapping cards. The caption at the bottom reads, “Got any Duke’s Stamp cards?”

Early cards that actually depict card collecting will always be cool in my book.