Hall of Famer Hank Greenberg is one of the more underrated players of the 1930s and 1940s. His cards are certainly priced as a Hall of Famer but Greenberg is often not mentioned with the likes of other elite players of that era, including Joe DiMaggio and Ted Williams, despite winning two Most Valuable Player awards while missing three years due to World War II service.

Greenberg’s first major league action came in 1930, playing a single game as a 19-year-old. But he wouldn’t resurface in the majors again until 1933 and his rookie cards were first issued in 1934. Here’s a look back at them. 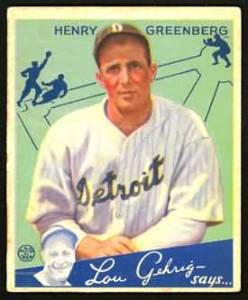 Without question, Greenberg’s most popular rookie card is his 1934 Goudey card. It is probably the most plentiful and is certainly the most well known.

The card is one of the highlights of the 96-card set, even if Lou Gehrig’s pair of cards sort of hogs the spotlight. Besides, those, though, with no Babe Ruth in the set, Greenberg’s rookie card is the next biggest deal.

Like everything else, the card has gotten more valuable lately. Even low-grade ones typically start around $300-$400.

Many collectors think this is Greenberg’s only card that was solely issued in 1934 but that doesn’t appear to be true.

Greenberg was one of numerous cards discovered in recent years as part of the 1934 Al Demaree Die-Cuts set. That card is significantly rarer, obviously, and is hardly ever seen for sale. Assuming that set was issued over only a single year, it is also undoubtedly a Greenberg rookie card.

A third Greenberg rookie card from 1934 is part of an equally rare set — the 1934 Annis Furs series (pictured here). These cards have been simply been referred to as a Detroit Tigers team set in some circles. However, these cards were issued by Annis Furs and Greenberg’s rookie is the prized possession in it. This is another rare card that is difficult to price simply because it is seen so little. 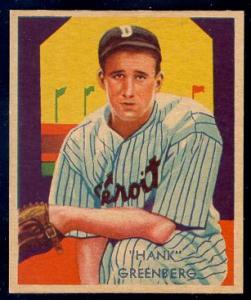 In addition to those two 1934 cards, Greenberg is found in a couple of other sets that were issued over a range of years beginning in 1934.

Greenberg is first found in the 1934-36 Diamond Stars set. But while that series did begin in 1934, Greenberg’s card in it is not technically a rookie. That’s because his card was issued only in 1935, according to the Old Cardboard checklist. While an early Greenberg card in a set that began in 1934, his specific card is not a rookie. 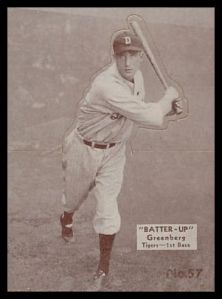 The rookie card outlook is a bit better for Greenberg’s Batter Up cards. Those cards were also issued in 1934 through 1936. But Greenberg is one of the low number cards that are believed to have been distributed in 1934.

Are all of those cards from 1934 (meaning, were they not later reprinted in 1935 and 1936)? I’m not sure if that’s ever been definitively proven. But the consensus around most of those in the hobby is that those are 1934 cards.

The high number cards are believed to have been distributed in 1935 and 1936 but I am not positive that none of the original cards from 1934 were reprinted and distributed in those years as well (which would effectively make those non-rookies). But for all intents and purposes, the Batter Up cards are considered to be Greenberg rookies.