A Rare Boxing Card — and the Longest Fight of All Time

These days, if a boxing match goes nine or ten rounds, it’s considered a pretty long fight. But what about 110 rounds?

There are all sorts of tales about old boxing fights lasting 20, 30, or even 40 rounds. But one particular fight in the 19th century is credited as being the longest fight of all time, going 110 rounds and lasting nearly seven hours and 20 minutes.

On April 6 in 1893, fighters Andy Bowen and ‘Texas’ Jack Burke fought in the longest boxing match in history. The match was never even supposed to take place but Burke stepped in as a replacement as Bowen’s opponent dropped out of the bout. 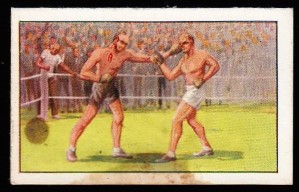 The fight went on and on — and on. Round after round. So who won? In the 110th round, both men were apparently too tired to go on and the fight was declared a draw. The careers of both men after that were short-lived. Bowen was killed in a fight at the hands of Kid Lavigne the following year and Burke would fight only five more times after that.

The famous fight was not depicted on any cards at the time it happened. However, it does appear in a rare UK food card set in the 1920s or 1930s (I have seen it credited as both a 1926 set and a 1934 set) called the Oxo Feats of Endurance set. The card is sometimes referred to as a tobacco issue but that is incorrect. Oxo is actually a brand of beef cubes and this product is still made to this day. The cards are extremely small, measuring only a little over 2″ tall.

The card features different feats around the world. This is one of the few sports cards in it (a separate card exists for cycling). It features a small color picture of the fight with a short description on the back.

Despite the fact that the back has limited text, the card managed to get both fighters’ names wrong. Burke is called ‘Bourke’ and Andy Bowen is given the first initial of W. for some unknown reason.

The card is quite rare in the United States, though it can sometimes be found internationally — particularly from sellers of U.K. cards. Prices for it vary quite a bit due to its rarity. It can often sell for modest amounts but American sellers familiar with its rarity may ask significantly more for it.

How many other cards exist for the pair? I’m not aware of any pre-war cards that document the fight and even cards for the two in general.

Cohen is pictured on at least a cabinet photo or two, but not on traditional trading cards that I am aware of. And while there is a Jack Burke featured in the T220 Champion Athletes and Prizefighters set, it does not appear to be the same fighter. This may be the only true pre-war card for either man, though I cannot confirm that.