The 1933 Goudey baseball set is one of the most popular releases of all time. It’s so popular, in fact, that it’s often grouped with the T206 and 1952 Topps sets as a Big Three of collecting sorts.

The set is popular because it boasts a number of Hall of Famers and big names, led by four cards of Babe Ruth. As I wrote recently, prices for those Ruth cards have, like other things in the hobby lately, sort of gotten out of control price wise. But the set still is chased quite a bit despite having some very expensive cards in it.

After that first tier of stars, you’ve got all sorts of other cards that aren’t entirely expensive but aren’t commons, either. And one of those is for a guy named Benny Bengough.

Bengough was not a star, per se. He had some solid seasons with the New York Yankees and, in particular, his 1926 season was promising as he was batting .381 through 36 games before an injury derailed that start. But in general, his cards are not priced as star cards and he was a career .255 hitter. 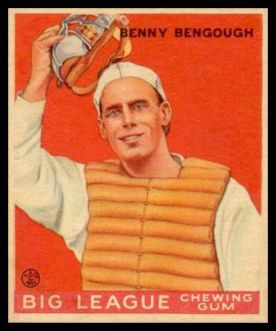 ut if you merely went by the prices of his 1933 Goudey card, you might be inclined to think of him as a key player. While other low-grade commons in decent shape start around $10, Bengough’s card starts around $30 or $40. Why are the prices so high for his cards?

The first thing one wonders is if his card was shortprinted, but it assuredly is not. Pop reports show the card is quite plentiful and his card has even been graded more than the cards of some Hall of Famers in the set, confirming its value and popularity.

So if the card is not hard to find by comparison and he is not a star player, why the reason for the value?

The biggest thing is that the card is No. 1 in the set and No. 1 cards often command a great deal of interest. Plus, the No. 1 card in such a popular set is a card that is even more attractive.

But take a closer look — does that really make sense? No. 1 cards, just like the final card in a set, are usually valuable if they are in good condition. That is because these ‘bookend’ cards were often damaged by set collectors as the first and last cards in a box or a pile. The idea is similar for checklist cards, which are often hard to find in high grade because collectors checked cards off with ink/pencil. So there is a premium for those cards if they are in better shape because there are going to be fewer of them in good shape than there are other cards in the set. But that doesn’t apply here because even the Bengough cards in bad shape are worth considerably more than commons in the set in equally bad condition. Bengough is seemingly getting a premium simply for being the first card in a massively popular set and that premium is not tied to condition.

That is probably the biggest reason for the Bengough bump, even if technically it doesn’t make much sense. But there are some other things, too, that are notable. One thing worth pointing out is that, while Bengough lasted ten years in the majors, he only has a handful of cards from his playing days. And even the 1933 Goudey card is interesting in that his last major league game was in 1932 (he did play a few years in the minors after that). Bengough’s 1933 Goudey card is easily the most popular of his issues and the fact that he has so few cards could be another reason the Goudey is chased so much.

Additionally, while his Goudey card depicts him with the Browns, he played the bulk of his career with the Yankees and was on two of their World Series teams. Yankees players are always popular, so go ahead and count that as a minor check for this card.

Still, there aren’t many other reasons you can find for this card being so popular. At first glance, it seems almost entirely tied to the fact that it is the No. 1 card in the set. And while it is a little odd that Bengough’s card does so well, it is not an entirely unique phenomenon.

I mentioned the 1952 Topps set at the beginning of this article and we see the same thing with that one, too. Andy Pafko is the No. 1 card in that set and his card sells for significantly more than other commons in the release. Pafko was more of a star than Bengough was but most of his card prices in other sets are not commensurate with those of a truly star player. His card, too, even in low-grade condition, is sought after because it is the first card in a very popular set.

So what are the long-term prospects for the card? Will the price ever be ‘corrected’ to reflect one that makes more sense?

Trends can be hard to reverse. The card has long been held as a valuable one and that isn’t going to just disappear overnight. For now, anyway, the card is one that is going to continue to hold value. But it is a card that could conceivably come down a bit in the future if more collectors take a closer look and consider just why it has been so valuable.