The Little-Known Baseball Players in the T218 Champions Set

The T218 Champions set is one of the more well-known multi-sport issues from the pre-war era. But the set doesn’t get the attention of everyone because it’s missing the key sport that many collectors want — baseball.

The set has a collection of world class athletes, including boxers like Jack Johnson (who has two cards in the set) and James Jeffries (who also has two cards). It’s got all sorts of athletes, including track and field stars, billiards players, and even bowlers and aviators, as well as noted pedestrian, Edward Payson Weston. And don’t make fun of some of those subjects, because some of the athletes in those lesser known sports are subsequently some of the most valuable. But it doesn’t have any major league (or even minor league) baseball players.

But if you look closely enough, there are baseball players there. Three of them, actually.

Baseball in the Olympics

I wasn’t aware of this until a collector mentioned it to me on Twitter. But buried in the set are some track and field stars that did dabble in baseball. Now, finding athletes in the set that would have played the sport on some level probably wouldn’t be too difficult. These were world class athletes so it’s likely that some would have played high school baseball or something like that. But these guys actually played baseball in the Olympics.

In 1912, baseball was popular here but was not getting much traction elsewhere. Even in Japan where baseball would eventually become quite popular, it was not yet a major attraction.

That year with the Olympics being held, the sport was on display for the world through an exhibition baseball tournament. It was the first appearance of the sport in the Olympics played outside of the U.S. There are records of some baseball being played at the 1904 Olympics in St. Louis but few records were kept of it. But in 1912, we’ve got actual documented baseball at the Olympics.

With the sport still growing, most countries probably would have had a very difficult time fielding a team of players. So the ‘tournament’ only consisted of the U.S playing Sweden, since they were the host nation that year. A second game was also played between two U.S. teams.

Now, it would have been great if the sport was being showcased by the game’s best players. But the likes of Ty Cobb, Christy Mathewson, and others that could have played were in the middle of the season so using professional players wasn’t an option. Instead, the U.S. team consisted of track and field stars that were already participating in the Olympics. And several of those guys, coincidentally, are in the T218 Champions set. 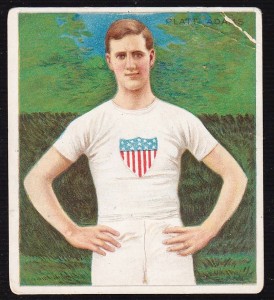 The three ‘baseball players’ in question are Platt Adams, Frank Irons, and Abel Kiviat. None of the trio is really a household name today but all were great Olympians for the United States.

At the time he was inserted into the set, Adams had not won a medal. But he would win a gold and silver in the long jump and high jump in the 1912 games. Coincidentally, his brother, Ben, was a track and field star that also played on the baseball team but he is not in the T218 set. Irons won gold in the 1908 long jump and Kiviat won gold (3,000 m team race) and silver (1,500 m race).

The one guy missing from the T218 set that could really made it special was Jim Thorpe. Thorpe won gold medals in the decathlon and pentathlon in the 1912 Olympics but his absence is explained by the fact that the set was mostly completed by 1912. It’s often listed as a 1910 set but is actually believed to have been issued from 1910 through 1912. He would go on to the major leagues to play professional baseball and, as expected, he was one of the players in the exhibition. He played in one game (the all-United States contest that was played second, going 1-2 in the game).

So how did the team fare? Pretty well. Even though it was a team of amateur players, the United States easily beat Sweden, 13-3 in a shortened six-inning game. And you want to know the kicker? The Americans had a 13-2 lead going into the top of the final inning. Instead of batting again, they declined and actually gave Sweden six outs that inning. Sweden did score a third run but, obviously, it wasn’t nearly enough.

Sweden did basically field its own team but they still needed help to round out a squad. So four United States players, including Adams’ brother Ben, actually played for Sweden.

The second game featured all Americans with an ‘East’ team representing the Olympics as a whole and a ‘West’ team that represented Finland.

Of the players with cards in the set, Kiviat was the star in the exhibition, going 4-7 in the two games, with a stolen base and a triple, while scoring four runs. Irons was 2-6 in two games and Adams was the pitcher for the East team in the second exhibition game (his team won 6-3).

The great news is that, like all cards in the T218 set, the cards for these guys are very affordable. It is quite easy to find decent cards of these guys for $10. Even low grade cards of them start at only a few bucks.